Salman further says that he didn't know the meaning of the word nepotism. He cites examples of Sanjay Dutt, Raj Kapoor, Sunny Deol defending nepotism. He said that many star kids have failed when their parents launched them. Salman also cites examples of Jackie Shroff, Shah Rukh Khan, Akshay Kumar to further prove his point. 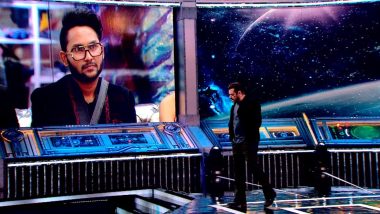 Love, friendship, betrayal and controversy were all played out this week of Bigg Boss 14. Salman Khan is back to host another Weekend Ka Vaar of Bigg Boss 14. The promos have shown us that the actor will reprimand Rahul Vaidya for he called out Jaan Kumar Sanu over nepotism. Salman will also school Rubina Dilaik for her complaints of violence during the tasks. Kavita Kaushik, Jasmin Bhasin, Nishant Singh Malkhani, and Rubina Dilaik are nominated for eliminations, after mid-week twist. Here are some highlights of the latest episode of the reality show. Bigg Boss 14 Contestant Nishant Singh Malkhani's Brother Lakshay Says Actor Is Portraying His Real Self and Not Faking His Personality.

Salman is not happy about Rahul's nepotism remark on Jaan. He asks Rahul if his parents paid for his education.

Salman says that when he asked his father, Salim Khan, to recommend him to the directors and producers he meets, his father said that if someone saw something in him, they'd ask for him themselves.

Salman tells Jasmin that she agrees that she's weaker than Rahul. He says that Rahul was not threatening her. Salman adds that if Rhona Rousey had asked Rahul Vaidya to leave the bag, he would have.

Salman plays the audio of the fight between Rahul and Jasmin.

Rubina Defends Her Accusations of Violence

Salman keeps asking Shardul why he's staring at him. Salman says that Shardul is scaring him. Shardul says that he is still embarrassed about giving the wrong answer.

Rubina Gets Caller of The Week

Rubina gets caller of the week, who asks her why she makes an issue out of everything. The caller also asks her if she has a problem with Eijaz becoming the captain. She says that she was having a problem that the people were not able to decide that they wanted to make Eijaz captain and it was a last-minute decision.

(The above story first appeared on LatestLY on Oct 31, 2020 10:15 PM IST. For more news and updates on politics, world, sports, entertainment and lifestyle, log on to our website latestly.com).