Bigg Boss 14’s Rakhi Sawant Calls Her Wedding a ‘Scam’, Hints at Ending the Marriage After Her Exit From the Show

It so happened that Bigg Boss gave her a task of destroying a letter sent by Ritesh in order for her wish to be granted. Rakhi thinks about the same and talks to her fellow housemates about what should she do. 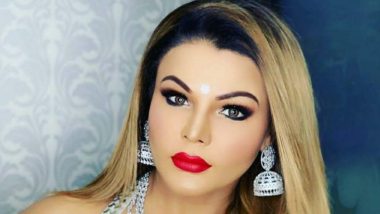 Rakhi Sawant's marriage to UK based businessman Ritesh has always been a topic of discussion for the longest time. The actress revealed that she got married to him back in 2019 and ever since her revelation, her fans ave been eagerly waiting to see who Ritesh is. While Ritesh might have never made an appearance, Rakhi did open up about him at length on Bigg Boss 14. At the beginning of her stint in the Bigg Boss house, she talked about how she has requested her husband to make an appearance on the show and how much she loves him. Bigg Boss 14’s Rakhi Sawant Begged Husband Ritesh to Reveal His Identity, Says He Agreed to Do It Before They Have Babies.

Things started taking a turn when Rakhi opened up about how Ritesh was already married to someone before they tied the knot. She revealed that he even has kids with the woman. Rakhi was torn while talking about it and it looks like she finally is ready to say goodbye to this relationship. It so happened that Bigg Boss gave her a task of destroying a letter sent by Ritesh in order for her wish to be granted. Rakhi thinks about the same and talks to her fellow housemates about what should she do. After putting much thought into it, Rakhi announces that she will not read the letter and destroy it.

“I do not have a bond like Rubina (Dalaik)-Abhinav(Shukla). Shaadi meri jhol hai, wo hai (My wedding is a scam). Whatever I revealed on this show, had I known that earlier, maybe I would not have married him.” She hinted at ending her marriage once she is out of the show and said, “I cannot destroy a woman and a child’s life for myself. I do not need this letter. He has never given me anything that wives get. A wife’s rights do not end with getting jewels.” Aly Goni also jumped in to add that Rakhi has told him a few times, that the letter was not in her husband’s handwriting. Bigg Boss 14: Rakhi Sawant's Husband Ritesh in Talks with the Makers to Enter the Reality Show! Will He Finally Prove His Existence?

She went on to say, "I love my husband and I got married with all my heart. I will be hurt after destroying it. But I also feel that what kind of a relationship I am in when I haven't met my husband for the last 2 years. I feel I have all the right to think about myself. If my husband would have helped me financially then I would have not come to Bigg Boss, tried again for my comeback or would have been eager to earn money. But he did not help me, he did not pay my loans. I am still paying for money, he is only helping with insurance."

Earlier during an episode, Rakhi Sawant could be seen standing in front of the camera and talking to her husband Ritesh on the occasion of Valentine's Day. She was seen telling her husband, "Ritesh, you may be in any corner of the world, here's wishing you - Happy Valentine's Day. Humne Valentine's kabhi saath mein nahi manaya (We have never celebrated the festival together)." She then is seen getting teary-eyed while sending a message to her husband.

(The above story first appeared on LatestLY on Feb 18, 2021 02:51 PM IST. For more news and updates on politics, world, sports, entertainment and lifestyle, log on to our website latestly.com).