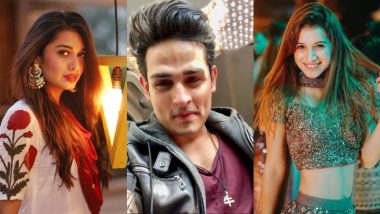 The entire saga between Priyank Sharma, Divya Agarwal, Benafsha Soonawala and Varun Sood just does not seem to die down. Priyank Sharma and Divya Agarwal were one of the hottest couples in town until Bigg Boss 11 happened and stirred up quite some controversies. Then VJ Benafsha Soonawala entered the mix along with her then-boyfriend Varun Sood and things got even more complicated. Today, Benafsha and Priyank are rumoured to be a couple and so are Divya and Varun, who are currently seen in the MTV Ace Of Space house. Divya Agarwal Reveals Shocking Detail About Ex-Beau Priyank Sharma, Says He Is a Bisexual.

Both Varun and Divya have been making quite some revelations in the show. Recently, while Varun revealed that he had caught Benafsha cheating on him, Divya went ahead to state that Priyank was a bisexual.

Following that, Priyank penned two letters addressing Divya. And now, Divya's representative uploaded screengrabs of her chats with Benafsha, where Priyank was the topic of discussion. Bigg Boss 12 Contestants: Divya Agarwal CONFIRMS She Is Not Entering the House, Was She Rejected by the Makers?.

The post also mentioned how Priyank was as 'pretentious' as it got.

There are a lot of other chats pictures and things that can be put here to prove that you are a human being who is mean and selfish . Who cheats and plays with multiple girls and boys emotionally and use them for your needs and move on and than talk rubbish and try to slut shame them . Than on public try to show how good a human being you are . Only adding 3 screenshots on chats between @benafshasoonawalla and divya cause this was necessary to tell that Divya is not using your dirty name after breaking up with u post a year . You have been trying to get back to her , when your current gf ben caught u , messaging that don't think I am trying to get back while speaking about divya and other girls and boys you have been with and have dated, in the most vulgar way to ben and others , Trying to slut shame all of them in front of other people and about the guys you have been with portray then as they are obsessed about you and than try to become the victim in a situation where you are the one torturing emotionaly post doing wrong and getting what you needed from people financially or physically or socially . If Ben's parents are reading this get your daughter out of this guy's life . She cries abuses complains and is still stuck with him . You can contact mother and get the rest of the messages which for better reasons cannot be uploaded here . @priyanksharmaaa This is not the last post . Everytime you will put out a lie , you will get a truth . The whole family is standing beside Divya and not just for her but others who can't stand . You are a bad human being, you hAve done wrong to a 17 year old fan, the girl who you claimed to love for 12 years , Divya and the list is long but it needs to end . People need to know you look like good human being your heart is black . And your Best Friend from 7 years say’s Karma @kritikaakapoor96 .The authenticity of the chats can be checked by any legal body . #notlastpost @karanjohar @lostboyjourney @ektaravikapoor @rannvijaysingha @princenarula @kkundrra @varunsood12 @kritikaakapoor96 @mtvindia

While things seem as clear as they can get on social media right now, with Divya being locked up inside the Ace Of Space house, looks like we'll have to wait for her to come out and clear things up.

(The above story first appeared on LatestLY on Nov 12, 2018 07:13 PM IST. For more news and updates on politics, world, sports, entertainment and lifestyle, log on to our website latestly.com).