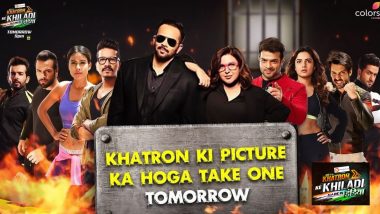 This season will see names like Karan Patel, Nia Sharma, Jasmin Bhasin, Aly Goni, Rithvik Dhanjani, Karan Wahi, Jay Bhanushali and Haarsh Limbachiyaa. The latter's wife and KKK9 participant Bharti Singh will also be joining the show from next week as a wildcard. Hina Khan was approached for the show but she turned down the offer. Khatron Ke Khiladi Made In India: Bharti Singh Roped In As Wildcard Contestant; To Re-Unite With Husband Haarsh Limbachiyaa (Deets Inside).

And now, here are some of the 'shocking' promos of the show that have been released and make us await eagerly for the stunt reality show to start.

Check Them Out Below:

The One With Shocks:

The One With All The Screams:

The One With The New Host:

In other news, filmmaker Farah Khan will be filling in for Rohit Shetty for the first two episodes of Khatron Ke Khiladi: Made in India as the director had to fly to Hyderabad owing to prior commitments. However, he will be returning as the host from episode 3 of the adventure reality show.

(The above story first appeared on LatestLY on Aug 01, 2020 12:11 PM IST. For more news and updates on politics, world, sports, entertainment and lifestyle, log on to our website latestly.com).