We look for gripping content on the OTT platforms every week, so that audience can relax and binge-watch what they prefer and want. This week we have some key releases on OTT, let's quickly take a complete look at the series and movies releasing on the OTT platforms this week. 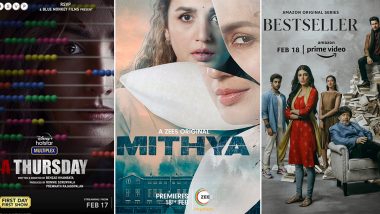 We are stepping on the third week of February 2022 and this week we have some great releases. With that, we can also see there are many movies releasing on the big screens. However, there are several interesting series and movies releasing on the OTT platforms like Disney+ Hotstar, Amazon Prime Video, ZEE5 and more. Talking about the biggest release of the week it would be A Thursday, which will release on Disney+ Hotstar on February 17. The thriller-drama is directed by Behzad Khambata and stars Yami Gautam Dhar, Atul Kulkarni, Neha Dhupia in lead roles. Apart from them, the movie also sees Dimple Kapadia, Karanvir Sharma, Maya Sarao, Kalyanee Mulay, Boloram Das in supporting roles. A Thursday Trailer: Yami Gautam's Dark Character in the Disney+ Hotstar Film Will Give You the Chills (Watch Video).

Another big release of the week would be Mithya, which is all set to stream on ZEE5 from February 18. Directed by Rohan Sippy, the psychological-thriller series features Huma Qureshi, Avantika Dassani, Parambrata Chatterjee, Samir Soni and Rajit Kapoor. The web show is the official adaptation of the 2019 British Series Cheat. Another interesting release of the week would be Bestseller, which will drop on Amazon Prime Video on February 18. The thriller web show is helmed by Mukul Abhyankar and stars Mithun Chakraborty, Shruti Haasan, Arjan Bajwa, Gauahar Khan, Sonalee Kulkarni and Satyajeet Dubey. Mithya Trailer: Huma Qureshi and Avantika Dasani’s ZEE5 Psychological Thriller Deals With Crimes of Plagiarism (Watch Video).

(The above story first appeared on LatestLY on Feb 13, 2022 04:33 PM IST. For more news and updates on politics, world, sports, entertainment and lifestyle, log on to our website latestly.com).