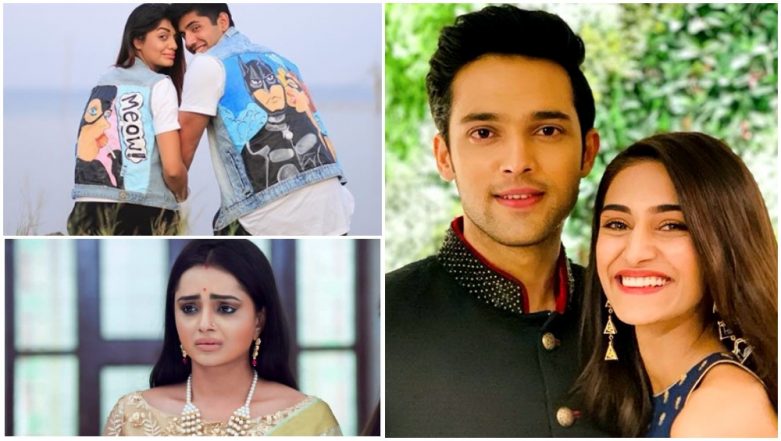 Here's a look at the TV newsmakers of the week. (Photo Credits: File Photo)

The weekend is here again! And it's time that we take a look at the top 5 news of the week. While a lot has been happening in the telly land this week, here are 5 things that you can’t afford to have missed this week. From Parul Chauhan aka Swarna quits Yeh Rishta Kya Kehlata Hai to Qayamat Ki Raat actor Vivek Dahiya joining Vicky Donor actor Ayushmann Khuranna to endorse voter literacy in his hometown Chandigarh to Erica Fernandes refuting rumours of dating Kasautii Zindagii Kay 2 co-star Parth Samthaan, here is a round-up of TV's newsmakers! Erica Fernandes, Hina Khan, Disha Vakani – Take a Look at the TV Newsmakers of the Week

Parul Chauhan, who is currently seen essaying the role of Kartik's (Mohsin Khan) mother and Naira's (Shivangi Joshi) mother-in-law (Swarna) on Yeh Rishta Kya Kehlata Hai, has decided to quit the show. While she has been missing from the show for over than a month now, the latest reports suggest that she doesn't want to play a grandmother on the show and hence she decided to call it quits. She confirmed the same to Times Of India and said, "Yes, I have quit the show as I was not ready to play the role of a grandmother's role at such an early stage of my career. I felt I won't be able to do justice to the role. I spoke to Rajan sir (Producer) and thankfully he understood my concerns."

Parth Samthaan and Erica Fernandes', who is currently seen essaying the iconic roles of Anurag Basu and Prerna Sharma in Ekta Kapoor's Kasautii Zindagii Kay 2, off-screen camaraderie has been just as good as their on-screen chemistry and this has set off rumours about them being more than just friends and love is blossoming between the two. However, refuting rumours of the link-up, Erica, in a statement to Hindustan Times, "It is news to me that such rumours are out there. But, I guess, rumours are a part and parcel of the entertainment industry."

Ekta Kapoor is all set to bring back the new season of hit erotic-horror web series Ragini MMS on her OTT platform ALTBalaji. While Ragini MMS Returns starred Karishma Sharma and (Vikas Gupta's younger brother) Siddharth Gupta, the new season will see real-life lovebirds Divya Agarwal and Varun Sood, who were last seen in MTV's Ace of Space, playing the lead roles in the upcoming season. The report also suggest that Divya and Varun have already started shooting for the web-series.

Vivek Dahiya, who is known for his good deeds, has taken up a new initiative, which is to endorse voter literacy in his hometown, Chandigarh. The actor has been brought on board as the ambassador of SVEEP, Systematic Voter Education and Electoral Participation program. Talking about it, the actor said, "It's an honor to be chosen by the Election Commission of India for a cause of prime importance," further adding, "We keep traveling to perform in the remotest parts of the country or make appearances because of the celebrity status but this is an opportunity to do my bit for the country even if it is just by increasing voter awareness and endorsing voter literacy in India representing my state."

Television actor Sooraj Thapar, who has featured in various popular shows including Hum Paanch Phir Se, is on cloud 9 as he became father of a baby boy on the auspicious day of Gudi Padwa. The 51-year-old actor and his beautiful wife Dipti Dhyani, who got married in 2012 and are already parents to a 5-year-old son Vishvm, welcomed their second bundle of joy on April 6. After Sooraj, another actor who welcomed her first child on the auspicious day of Gudi Padwa is Roshni Chopra's actress-sister Deeya Chopra. She has delivered a baby boy with husband Ritchie Mehta on April 7.