Rudra: The Edge of Darkness - Raashii Khanna is Excited and Nervous at the Same Time to Shoot For Ajay Devgn's Web-Series

Actress Raashii Khanna, known for her work in Telugu films, has started shooting for the Hindi webseries Rudra: The Edge of Darkness. She is thrilled to finally start the shoot here. 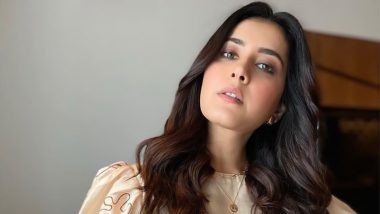 The web show is the Indian adaptation of the British show - 'Luther'. Talking about starting the shoot, Raashii tells IANS: "I am really excited and nervous at the same time. It's something I am really looking forward to." Rudra – The Edge of Darkness: All You Need To Know About Luther, Idris Elba’s Series That Inspired Ajay Devgn’s OTT Debut on Disney+ Hotstar.

Besides this, Raashii will be seen in Raj and D.K.'s next webseries alongside Shahid Kapoor, Tamil films 'Aranmanai 3', 'Methavi', Telugu film 'Thank You', and Malayalam film 'Bhramam'.

(The above story first appeared on LatestLY on Jul 28, 2021 07:10 PM IST. For more news and updates on politics, world, sports, entertainment and lifestyle, log on to our website latestly.com).