NV says Ishaani that he’s shifting Sid to Sanjivani and is handing over his case to another doctor. He asks her to at least fulfil one thing for him and that’s to come back to Sanjivani. Ishaani calls him stubborn to force his decisions on her and never understand her pain. 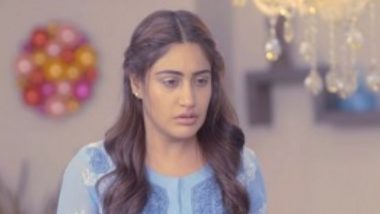 In yesterday’s episode of Sanjivani 2, Ishaani loses her cool when NV is made to perform the mangalsutra ritual. Later at night, Ishaani sneaks into Sid’s room while NV keeps an eye on her. In tonight’s episode we see Ishaani (Surbhi Chandna) near Sid (Namit Khanna) and NV (Gaurav Chopra) watches it from afar. She panics and starts to leave but her dress gets stuck on the hook of Sid’s bed. She tries removing it and her hand touches Sid’s hand. Ishaani says that he has only given pain to her and she hates him. NV goes to his bed and pretends to sleep. Ishaani comes and lies down beside him silently and cries. Sanjivani 2 February 3, 2020 Written Update Full Episode: Ishaani Is Shocked to Learn That Sid Was Enrolled in a Hospital Notorious for Organ Scams.

Next day morning NV says Ishaani that he’s shifting Sid to Sanjivani and is handing over his case to another doctor. He asks her to at least fulfil one thing for him and that’s to come back to Sanjivani. Ishaani calls him stubborn to force his decisions on her and never understand her pain. Sanjivani 2 January 31, 2020 Written Update Full Episode: Ishaani Decides to Leave NV After Revealing the Truth, While Sid’s Life is Still In Danger After He’s Admitted To Another Hospital.

NV agrees and says that his family is his profit and he will work hard to maintain it, on the other hand, Sanjivani’s patient’s health is another bigger profit that he’ll never let go. Rahiil comes there and NV greets him. Rahiil gets angry at NV for treating Sid like football to fulfil his wife’s demands. He blames Ishaani for continuously putting Sid’s life in danger. NV says that mistake has happened but unknowingly and asks him to take Sid to Sanjivani. Rahil leaves taking Sid in an ambulance.

Rahiil treats Sid in Sanjivani and tries reviving him from the coma. NV brings a patient Matre, whose case is handled by Rishab and Ishaani. Ratan tells Mrs Matre that her husband’s heart failed 60% and they need to perform his surgery once they get a heart. Ishaani is standing outside hesitating to enter inside due to Sid’s presence. NV forces her to come and she comes inside fearing. NV introduces the doctors to his wife and assures to give the best treatment for her husband.

Ishaani is all the while lost seeing Sid and paid minimal attention to NV. NV shakes her and the clipboard in Ishaani’s hand falls down. She bends to pick it when her hand touches Sid’s hand. Sid’s pulse shots up immediately and Rahiil panics. They try retrieving Sid when all of a sudden his pulse starts dropping to minimal.

Rahiil and Rishab try to stabilize Sid Ishaani runs away unable to bear the sight dropping her clipboard on floor. NV sees the panic and asks Rahiil and Nurse Philo to treat without falling emotionally weak. They calm down and make Sid stable.

Rahiil, Rishab, and everyone are praying in the hospital’s temple for Sid’s good health. NV brings Ishaani there but she begs him to not to force her to pray. Rahiil once again taunts Ishaani for not valuing Sid’s pain. NV having had enough says Rahiil he only sees Sid’s pain and not Ishaani’s. He says that he has witnessed her depression and panic attacks because of Sid and she’s equally ill as Sid. He asks him to pray for both to recover. Ishaani feels proud of NV as he supports her.

In the precap, Ishaani tries saving a sinking Sid.

(The above story first appeared on LatestLY on Feb 05, 2020 08:10 PM IST. For more news and updates on politics, world, sports, entertainment and lifestyle, log on to our website latestly.com).