Vidya Balan's Sherni is currently streaming on Amazon Prime Video and is available for only paid subscribers. Check out what critics have to say about the film. 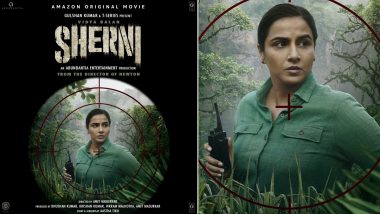 Vidya Balan's latest film, Sherni is finally out on Amazon Prime Video. Helmed by Amit Masurkar, this happens to be the actress' second digital release after Shakuntala Devi. The social drama had high expectations attached to considering it sees powerful performer Vidya in the lead role of a forest officer. The plot of the movie revolves around Balan's character who tries her best to keep a balance between the world where man and animal are at conflict. Early reviews of the movie have dropped online and mostly all are on the positive side. Here, check them out. Sherni Movie Review: It's a Roaring Vidya Balan Show in This Social Drama That Feels a Weaker Followup to Newton (LatestLY Exclusive).

India Today: "The driving force of the entire film quite rightly is Vidya Balan. She doesn’t make bold statements as she challenges patriarchal mindset at work and at home. She is restrained, but determined, a rare idealist in a flawed system. Her gender often comes up in conversations with the locals."

The News Minute: "Despite these quibbles and questions though, I enjoyed the meditative quality of Sherni. It does not ignite a false sense of hope in the viewer as it comes to an end; rather, it leaves one with a sense of loss and shame at what we have become. A lump in the throat that we cannot quite swallow."

NDTV: "You know exactly what Sherni is trying to convey (tangentially but tellingly) when a minister peremptorily tells Vidya Vincent that no "proof" that she gathers will override the "faith" of the people." Vidya Balan Takes Her 'Sherni' Promotions Quite Literally; Picks a Leopard Print Outfit For an Appearance (View Pics).

Times of India: "Sherni makes for an intense, intriguing film and is a must-watch. If you’re expecting the roar and rumblings of a regular Bollywood film, this one is far from it. But therein lies the beauty of it."

News18: "Vidya Balan has once again shown the willingness to take up an unconventional story and she has done it well, but Sherni is a director’s film. Masurkar has shown impeccable maturity in handling a lesser known subject. Sherni deserves your attention because it’s about synergy—your synergy with the surroundings."

Well, after reading the above reviews we feel that Vidya Balan in Sherni is roaring and how. Also, apart from her, the ensemble cast of Sherni includes Sharat Saxena, Mukul Chaddha, Vijay Raaz, Ila Arun, Brijendra Kala, and Neeraj Kabi. Stay tuned!

(The above story first appeared on LatestLY on Jun 18, 2021 12:29 PM IST. For more news and updates on politics, world, sports, entertainment and lifestyle, log on to our website latestly.com).