Comedian and social media personality Varun Thakur is all set to host the upcoming MTV reality show Anything For Love. 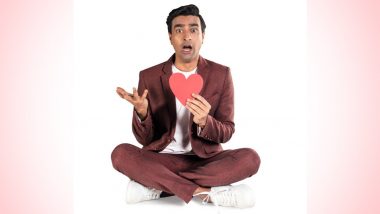 Comedian and social media personality Varun Thakur is all set to host the upcoming MTV reality show Anything For Love. It will be a game show in which in each episode there is going to have three pairs whose connection will be put on trial and they will undergo several tasks that will test their relationship and ultimately the one who wins these task will emerge as OTP -One True Pair. MTV EMAs 2021 Full Winners List: BTS Dominates the Night With Maximum Wins; Ed Sheeran, Taylor Swift and Others Take Home Trophies!

Varun Thakur says about the concept of the show and what he liked about it: "When I first heard about the concept of the show, it piqued my interest, for it decodes the relationships of today in the most unconventional yet fun ways. The reality game show puts the participating young couples in bizarre situations to test their compatibility which is something I'm going to enjoy making them do." Raja Kumari, DIVINE, Kaam Bhaari Bag Nominations for MTV Europe Music Awards Best India Act.

(The above story first appeared on LatestLY on Nov 27, 2021 11:31 PM IST. For more news and updates on politics, world, sports, entertainment and lifestyle, log on to our website latestly.com).