﻿﻿Star Plus' Yeh Rishta Kya Kehlata Hai recently saw the death of its protagonist Naira (Shivangi Joshi). Well, as per the current episode's track, Naira has fallen down the cliff and is missing. 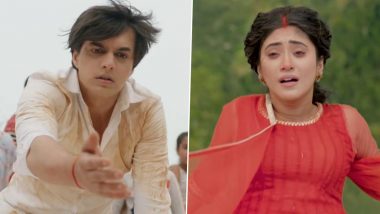 "The reports did not bother me, but yes I was surprised. I was thinking about the rumours that suddenly why are these doing the rounds. But as I knew they were rumours I did not bother much. Whatever is going to happen you all will get to know in the next 10 days. We can't say much about the story line but yes it is emotionally very taxing. I would request all the fans of Yeh Rishta to continue loving us the way they have been doing it for the last 20 years," said Shivangi, to ETimesTV. Yeh Rishta Kya Kehlata Hai: #Kaira Trends On Twitter After Naira Played by Shivangi Joshi Falls Off The Bus and Dies!.

Recalling how she cried uncontrollably during the narration of the track, Shivangi revealed, "I think everyone on the sets knows about my first reaction, when I was being narrated Naira's death sequence. Mohsin was also there, we were together while hearing the narration. I started crying, I wanted to stop my tears and I tried my best to control my emotions but I couldn't control myself. Even Rajan Shahi sir asked me why are you crying but I had no answer. While rehearing I was choked because of the emotions."

Her on-screen co-star Mohsin Khan too was emotional on hearing the track and revealed, "It is going to be an interesting twist. The way the plot is going to be executed even we don't know. We are not aware about the entire story line. The creative team is still figuring out and we are keeping our fingers crossed for the future episodes. Right now, the bus sequence we are shooting and the next story line has been beautifully written. There is one sequence which is 20 minutes long and while reading the scene I had tears in my eyes as well. Even while rehearing the sequence," concluded Mohsin.

(The above story first appeared on LatestLY on Jan 07, 2021 04:03 PM IST. For more news and updates on politics, world, sports, entertainment and lifestyle, log on to our website latestly.com).