Rajasthan: Toppers May Need To Present Documents To Verify Rank As per New Bill

The much-awaited Rajasthan Private Institutional Educational Regulatory Authority Bill 2022 will be tabled soon in the Assembly bringing in a series of changes in the education system, sources submitted on Thursday. 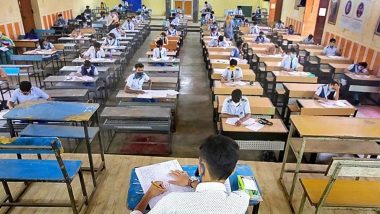 Jaipur, Oct 6: The much-awaited Rajasthan Private Institutional Educational Regulatory Authority Bill 2022 will be tabled soon in the Assembly bringing in a series of changes in the education system, sources submitted on Thursday.

The bill, as per sources, puts penalties of Rs 1 crore on bogus claims by private coaching centres about toppers. It also endorses recalling of registration and in fact, strictly bans the glorification of toppers by putting banners, posters and advertisements. Cyber Jaagrookta Diwas 2022: UGC Launches Syllabus of Cyber Security Course at UG and PG Level.

Also, there will be a cap on advertisements, and news. Besides, toppers being claimed by coaching centres will be called with documents to verify the truth.

The bill further recommends an aptitude test which will reportedly be conducted by a competent authority before a student gets registered in any coaching centre of competitive exam. Parents also will get notification in this regard. SSB Constable Recruitment 2022: Applications Invited for 399 Posts At ssbrectt.gov.in; Here’s How to Apply.

A committee with academicians have drafted the bill which has shared insights on challenges of teaching a child in private educational institutes.

It also suggests appointment of counsellor as mandatory in these institutes.

As many young students are staying together in the vicinity of these coaching centres, teenage pregnancies among other issues have been cited, and hence suggestion of counselling has been forwarded.

Rajasthan Education Minister B.D. Kalla, however, did not answer calls when he was contacted.

(The above story first appeared on LatestLY on Oct 06, 2022 10:48 PM IST. For more news and updates on politics, world, sports, entertainment and lifestyle, log on to our website latestly.com).