Is Aadhaar Mandatory for School Admissions in India? All You Need to Know 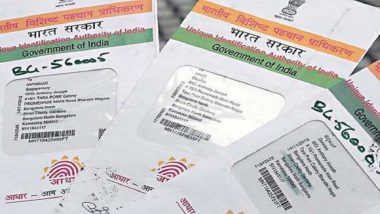 Aadhaar number is a 12-digit identification number issued by the Unique Identification Authority of India (UIDAI) to all the resident of India. From a new born to a senior citizen, everyone can enroll for Aadhaar without any charge. The UIDAI is mandated to issue an easily verifiable 12 digit random number as Unique Identity to all people of the country. Aadhaar serves as a unique identity proof and is essential to avail  a number of services. However, there are several frequently asked questions about the Aadhaar requirement, one of the common one being is that if Aadhaar is mandatory for school admissions. Here the answer to this question! How to Verify Mobile Number, Email ID Linked on Aadhaar Number Online on UIDAI Website uidai.gov.in.

Is Aadhaar Mandatory For School Admissions?

In an official notification on September 5, 2018, the UIDAI had said that it is the responsibility of schools to provide Aadhaar enrolment and update facility to their students and ensure that no children are deprived/denied of admission and other facilities including their due benefits or rights for wants of Aadhaar. Any such denials are invalid and not permitted under the law. "Schools have to make sure that no child is denied of admission and other due benefits for the lack of Aadhaar. After admission of students in schools, the schools should provide Aadhaar enrolment and update facility to such students", the release said.

In a circular titled “No denial of admission in schools for want of Aadhaar and Organising Special Aadhaar Enrolment/update camps at schools”, the UIDAI said, that for children who are not yet assigned an Aadhaar number or whose biometrics in Aadhaar database is not updated, it shall be the responsibility of the schools under Regulation 12A of Aadhaar (Enrolment and Update) Regulations to arrange to provide for Aadhaar enrolments and biometric update of such students. Here's the Official Statement by UIDAI.

The UIDAI said that Aadhaar number is being asked from school children for availing admissions, obtaining scholarships, attending various Boards’ and other examinations, participating in various competitive examinations, etc. Also, mandatory update of biometrics in Aadhaar is required for children on attaining the age of 5 and 15 years to ascertain validity of their Aadhaar number assigned earlier. It is, therefore, necessary on Schools to arrange to provide Aadhaar enrolment and biometric update facilities to students without causing any hardships to them.

(The above story first appeared on LatestLY on Sep 22, 2020 12:18 PM IST. For more news and updates on politics, world, sports, entertainment and lifestyle, log on to our website latestly.com).