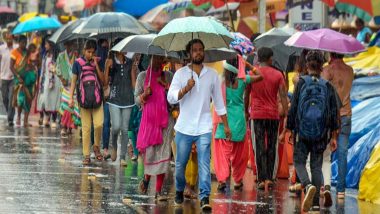 The India Meteorological Department (IMD) has predicted light to moderate rainfall in all the 33 districts of Gujarat on Sunday and Monday.  Monsoon Food Diet 2021: Foods To Avoid and Include In Your Diet To Stay Healthy During Rainy Season

According to the information received from the State Emergency Operation Centre (SEOC), Anjar received 122 mm rainfall between 6 am and 6 pm on Saturday, with almost 4 inches (98 mm) in just two hours from 2 pm to 4 pm.

The heavy downpour created a flood like situation in almost the entire district with water-logging disrupting the traffic and normal life. Many farms have turned into lakes in the district, with major crop loss feared in pomegranate cultivation.

Saurashtra too received heavy rainfall with many parts of Gondal city witnessing water-logging.

Districts like Junagadh, Surendranagar, Rajkot, Botad and those in south Gujarat like Surat also received heavy rainfall on Saturday.

(The above story first appeared on LatestLY on Jun 19, 2021 11:27 PM IST. For more news and updates on politics, world, sports, entertainment and lifestyle, log on to our website latestly.com).