Monsoon Food Diet 2021: Foods To Avoid and Include In Your Diet To Stay Healthy During Rainy Season

A healthy balanced diet is imperative to maintaining a healthy lifestyle as it avoids falling prey to diseases like cold, cough, malaria, dengue, stomach infections, viral fever, and pneumonia that are very common during monsoon season. In this article, we'll provide dietary rules for a rainy day with a list of foods that should be avoided and included in your monsoon diet. 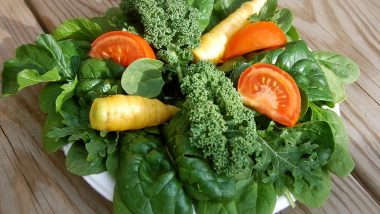 Monsoon is here and while we're enjoying the respite accorded by the rains against the scorching summer heat, we should bear in mind that monsoon is also a cesspool for diseases that might catch you unawares if you're not taking adequate precautions during this season. Rains have a way of bringing out the reckless in us, which usually throws caution and/or good sense to the gusting winds and entice us to indulge in foods that might not be quite healthy for our immune systems. Monsoons always make us reach out for pakoras and teas and consume them like they are running out of style. While comforts foods are, well, comforting, it would be wise to note that they might be counterproductive for a healthy diet. Monsoons are lovely, but they do have an insidious aspect that brings out infections and unhealthy food cravings that might put your health at risk.

A healthy balanced diet is imperative to maintaining a healthy lifestyle as it avoids falling prey to diseases like cold, cough, malaria, dengue, stomach infections, viral fever,  and pneumonia that are very common during monsoon season. In this article, we'll provide dietary rules for a rainy day with a list of foods that should be avoided and included in your monsoon diet.

Studies have shown that leafy vegetables are a breeding ground that festers bacteria and fungi that cause infections and diseases especially during cold seasons. . So washing these vegetables and heating them thoroughly should be a top priority during monsoon season.

The monsoon season houses many waterborne diseases from dengue to viral fever that festers in the air due to the drop in temperature and also increases in moisture level in the atmosphere. So it's best to avoid street food during this time.

The risk of contracting food poisoning is quite high during the monsoons. Fried food like pakoras might be too enticing to avoid during the cold wet season, but it should be consumed in moderation because excess can lead to indigestion and diarrhoea.

Dairy foods should be consumed in moderation as they might contain bacteria that is widespread during monsoon.

Fresh food is the best for the monsoon. However, this doesn't include eating raw foods straight out of the fridge or a cart. Ensure that these foods are properly washed before consumption, Leftovers in the fridge should be heated thoroughly before eating.

Vegetables like bitter gourd, herbs like methi, neem, and Haldi plus honey, is a great way to keep the diseases at bay.

Plenty of hot fluids is key to avoid falling ill from diseases in the monsoon. Ensure that you boil your water and consume copious amounts of tea sans dairy, soups and nutritious broth to maintain a healthy balanced.

This is your resource guide for all things healthy this monsoon season. So avoid making dietary mistakes and maintain a healthy lifestyle devoid of any infections or diseases. Have a safe and happy monsoon season folks.

(The above story first appeared on LatestLY on Jun 19, 2021 12:11 PM IST. For more news and updates on politics, world, sports, entertainment and lifestyle, log on to our website latestly.com).