Thousands of people staged a protest over the delicate issue of naming the upcoming greenfield Navi Mumbai International Airport (NMIA), a day after the Maharashtra government handed it over to the Adani Group for operations, here on Thursday. 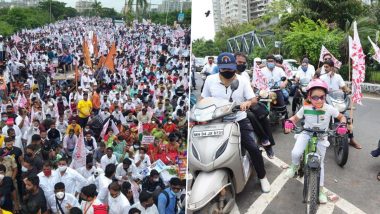 Mumbai, June 24: Thousands of people staged a protest over the delicate issue of naming the upcoming greenfield Navi Mumbai International Airport (NMIA), a day after the Maharashtra government handed it over to the Adani Group for operations, here on Thursday.

People in Navi Mumbai have been clamouring for it to be named after veteran local leader and Parliamentarian, the late D.B. Patil, while the Shiv Sena is keen on naming it after the party's founder, the late Balasaheb Thackeray.  Maharashtra Govt Approves Adani Group To Operate Upcoming Navi Mumbai International Airport

The protests erupted a day after the City and Industrial Development Corporation (CIDCO), which is the nodal agency for NMIA, said that the airport would be run by Adani Airport Holdings Ltd (AAHL), an entity of Adani Group.

Besides those in Navi Mumbai, thousands of people have marched in from Palghar, Thane, Raigad and Ratnagiri districts since the past couple of days to converge under the banner of the All Party Action Committee (APAC).

They have been supported by the opposition Bharatiya Janata Party and the Aam Aadmi Party, even as the ruling Maha Vikas Aghadi allies -- Shiv Sena, Nationalist Congress Party and Congress -- remained aloof.

Anticipating a large turnout, Maharashtra Police had made elaborate security arrangements in Navi Mumbai and its surroundings areas, blocking several approach roads besides deploying a huge posse of personnel to thwart any untoward incidents.

On Thursday evening, the organisers of the protest gave an ultimatum to the state government till August 15 to name NMIA after the late D.B. Patil, failing which they would hinder work at the airport, which is expected to launch operations in 2023-2024.

The CIDCO has already approved a proposal to name it after the late Balasaheb Thackeray, and senior Sena leader and Urban Development Minister Eknath Shinde had also stated that the NMIA would be named after the late Sena founder.

While Chief Minister Uddhav Thackeray has refrained from making any comments on the issue, his cousin and Maharashtra Navnirman Sena President Raj Thackeray had stated recently that since the NMIA is an extension of the Chhatrapati Shivaji Maharaj International Airport in Mumbai, the same name should be continued for the new airport.

Besides these, two other prominent names have been floated by various groups and online campaigns in favour of the late J.R.D. Tata, the father of civil aviation in India, while a BJP leader has demanded it to be christened after the late Vasantrao Nail, the state's longest-serving Chief Minister.

(The above story first appeared on LatestLY on Jun 24, 2021 07:51 PM IST. For more news and updates on politics, world, sports, entertainment and lifestyle, log on to our website latestly.com).