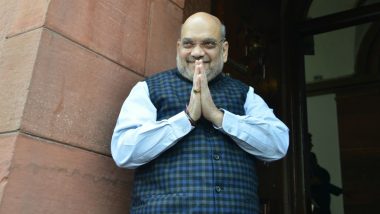 New Delhi, August 14: Union Home Minister Amit Shah tested negative for the novel coronavirus, confirmed an update issued by his official Twitter handle on Friday. The senior Bharatiya Janata Party (BJP) leader had contracted the infection earlier this month, and was subsequently admitted to the the Gurugram-based Medanta Hospital.

Shah, in a statement issued on social media, expressed gratitude to God for healing him from coronavirus. The Home Minister also thanked his supporters, well-wishers and family members for praying for him, apart from the medical practitioners who treated him. Shah further added that he would be remaining in home isolation for next few days.

In another tweet that followed, he specifically paid homage to the team of multidisciplinary doctors of Medanta Hospital who attended him for the past 12 days. Notably, Shah's result was confirmed as positive for COVID-19 on August 2.

On Sunday, Shah's party colleague and Lok Sabha MP Manoj Tiwari had triggered a row after he tweeted that the Home Minister has recovered and tested negative. This had prompted the government to issue a clarification, stating that he is still undergoing treatment.

Shah, 55, had raised concerns after testing positive for the disease as he suffered from comorbidities. He is reportedly a patient of high diabetes, and had also undergone an operation for treating lipoma last year.

(The above story first appeared on LatestLY on Aug 14, 2020 05:08 PM IST. For more news and updates on politics, world, sports, entertainment and lifestyle, log on to our website latestly.com).