Andhra Pradesh Shocker: Minor Raped For Over 2 Years by 22-Year-Old Neighbour on Pretext of Marriage in Anakapalle; Case Registered

A 15-year-old-girl was allegedly raped by her neighbour for two years in a village in Anakapalle district of Andhra Pradesh for two years on the pretext of marriage. 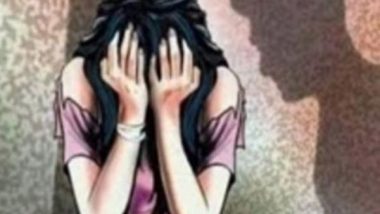 Vishakhpatnam, June 24: A 15-year-old-girl was allegedly raped by her neighbour for two years in a village in Anakapalle district of Andhra Pradesh for two years on the pretext of marriage.

The police said that the girl, a student, stated that she came in contact with B Nanaji (22) who resides in her neighbourhood, reported TOI.

The accused lured her into friendship and promised to marry her. He repeatedly raped her for two years. The accused is unemployed.

The investigation revealed that the girl’s father kept Rs 12.5 lakh cash in an almirah in the house for the future needs. The girl gave over Rs 11 lakh cash to Nanaji and his family members secretly. Bihar Shocker: 21-Year-Old Woman Set on Fire for Resisting Rape Attempt in Sitamarhi District, Two Arrested

The girl’s father was shocked to see only Rs 82,000 cash in the almirah. He also recently came to know that his daughter was lured by Nanaji. Kolkata Shocker: 30-Year-Old BPO Executive Gang-Raped by Senior Colleagues After Office Party, Accused Arrested

Though the girl’s parents requested Nanaji to marry their daughter after she attained the legal age of marriage, Nanaji denied the request citing various reasons.

The girl and her parents lodged a complaint against Nanaji and his family members seeking action against them.

“We have registered a case against Nanaji and his family members. The investigation is on to nab the accused persons," the police added.

(The above story first appeared on LatestLY on Jun 24, 2022 05:44 PM IST. For more news and updates on politics, world, sports, entertainment and lifestyle, log on to our website latestly.com).