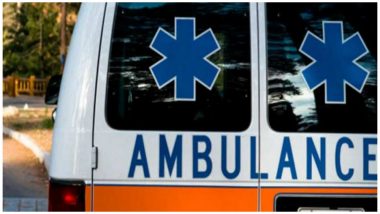 Bengaluru, July 3: A COVID-19 patient died on road while awaiting an ambulance for nearly four hours. The incident took place on Friday, when a senior citizen dialled for an ambulance to pick him up from a place located near to his residence. The Bruhat Bengaluru Mahanagara Palike (BBMP) initiated a probe after taking cognisance of the case.

The deceased, aged 64, wanted to be picked up by the ambulance at a location close to his house in Hanuman Nagar. Reports claimed that he did not wanted to create panic in his neighbourhood and therefore specified a pick up location for the ambulance. Bengaluru: Coronavirus-Infected Accused Flees From Hospital to Buy Alcohol, Caught After 7-Hour Chase.

While he walked to the point where the ambulance was asked to arrive, his condition deteriorated and he fell down, the deceased's family members told reporters. The ambulance providers blamed miscommunication for the delay, adding that the rains in evening further worsened the situation.

Karnataka: A COVID-19 patient died on road as ambulance couldn't reach to him in Hanuman Nagar even 4 hours after he informed Bruhat Bengaluru Mahanagara Palike. BBMP Commissioner Anil Kumar says, "I've ordered an inquiry into the incident. Action will be taken against guilty." pic.twitter.com/YUh3td21pW

(The above story first appeared on LatestLY on Jul 03, 2020 10:59 PM IST. For more news and updates on politics, world, sports, entertainment and lifestyle, log on to our website latestly.com).