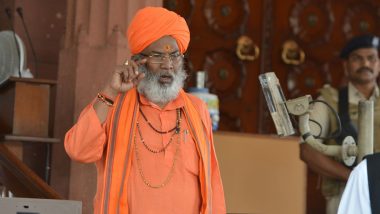 New Delhi, August 11: BJP Lok Sabha MP from Unnao, Sakshi Maharaj on Tuesday said that he received a threat call from a person who used a Pakistani number and threatened to kill him and other top leaders of the country.

"I have earlier received threats from the internet. Tomorrow I got a threat call from a Pakistani number. He abused me and threatened to bomb me and my residence within 10 days," he told ANI.

" He also threatened all top leaders of the country. I got afraid so I called UP Chief Secretary Home Avnish Awasthi and informed him," he added. nThe Lok Sabha MP from Unnao said that he will inform Prime Minister Narendra Modi, Union Home Minister Amit Shah, UP Cheif Minister Yogi Adityanth about the threat call.

"Either I hide or stop talking about Hindutva, start a protest against abrogation of Article 370 and become pro-Muslim then only my life will be spared. I will continue to get threats like these. I am not going to afraid. I expect the government to take care of my security," he said.