Subodh Kumar Singh and a civilian were killed after a mob went on a rampage in Bulandshahr over an alleged case of cow slaughter. 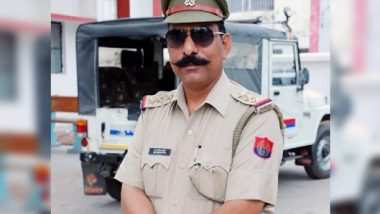 Lucknow, December 3: Anand Kumar, the Additional Director General (Law and Order) in Uttar Pradesh, said the slain cop Subodh Kumar Singh was leading the investigation into the lynching of Mohammed Akhlaq for about two months. Subodh Kumar Singh and a civilian were killed after a mob went on a rampage in Bulandshahr over an alleged case of cow slaughter.

"It is clarified that Subodh Kumar Singh was the Investigating Officer (IO) of Akhlaq lynching case from 28th September 2015 till 9th November 2015," Anand Kumar said. "A chargesheet was filled in the case by a different IO in March 2016," he added. Singh was instrumental in getting the meat samples to the lab on time.

Mohammed Akhlaq was lynched on September 28, 2017, in Bisahra village in Dadri district by a mob infuriated by rumours that he and his family had stored and consumed beef. According to reports, violence broke out after activists of Hindu Yuva Vahini and Bajrang Dal with an alleged cow carcass gathered on the Bulandshahr-Syana road and pelted stones at the police personnel.

Additional Director General (Meerut zone) Prashant Kumar said the protestors from Mahaw village and nearby areas pelted stones on the police and indulged in arson, setting ablaze several vehicles and Chingarwathi Police Chowki. A police team led by Inspector Subodh Kumar Singh rushed to the scene to pacify the protesters. The mob pelted stones at cops, critically wounding Subodh. The officer was also shot in the head and was declared dead at a community health centre.

Police also said a 20-year-old youth, identified as Sumit, died of gunshot wounds. Sumit, a second-year student, had gone to drop his friend who came to his place to give an invitation and got caught in the violence. According to his family, Sumit was shot in chest. Protesters claimed to have found some body parts of cow and its progeny in a jungle in Mahaw village, and blocked the Bulandshahr-Garh highway. The agitation later turned violent.

Uttar Pradesh Chief Minister Yogi Adityanath, who is in Rajasthan for the election campaign, expressed grief over the incident and said strict action will be taken against the guilty after the probe reports are received. He also said financial assistance would be extended to the affected persons.

(The above story first appeared on LatestLY on Dec 03, 2018 09:32 PM IST. For more news and updates on politics, world, sports, entertainment and lifestyle, log on to our website latestly.com).