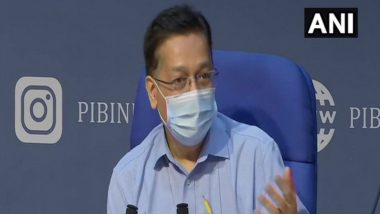 Union Secretary for Health and Family Welfare underlined the critical COVID control and management strategies as below: Centre Gives Rs 1,828 Crore to State Govts for Fight Against COVID-19.

DG, ICMR warned against any complacency with around 40,000 cases being reported daily since the preceding weeks. Highlighting the fact that 46 districts are showing more than 10% positivity while another 53 districts are showing a positivity between 5%-10%, he urged the States to ramp up their testing. States have been advised to conduct their own state level sero-surveys for district-wise disease prevalence data, as the national level sero-prevalence survey was heterogeneous in nature, in collaboration with ICMR to ensure the same sturdy protocols of survey. He advised the States to ramp up vaccination in the 60+ and 45-60 age categories as evidence shows near 80% of the mortality is from these vulnerable age-groups. Regarding enforcement measures, he advised the State authorities for avoiding all non-essential travel and to discourage all large gatherings of crowds.

Through a detailed presentation, a granular analysis of the highly affected districts (Districts of Concern) in these states, COVID-19 Vaccination Coverage, Status of Ventilators, PSA Plants, Oxygen Cylinders and Concentrators along with some key statistics was presented.

States were asked to use the INSACOG laboratory network for genomic surveillance to screen International Travelers (for the entry of new variants/mutants in India from other countries), monitor ongoing surveillance through Sentinel Sites (RT-PCR labs or secondary & tertiary care hospitals managing COVID cases) and surge surveillance.

States were advised to:

(The above story first appeared on LatestLY on Jul 31, 2021 07:13 PM IST. For more news and updates on politics, world, sports, entertainment and lifestyle, log on to our website latestly.com).