Five persons died and one person injured after gelatin sticks exploded early Tuesday in a village bordering Chikkaballapur and Bengaluru, the police said. 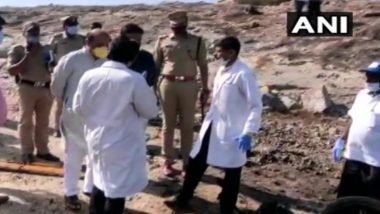 Mine owners successfully hid mining blast material twice in the last fortnight while raids were to be carried out. On Tuesday fearing another round of raid, the mine owner appears to have decided to dispose off the explosives in forested area adjoining the mine, where large gorges exist.

The blast occurred in the stone quarry unit situated in Hirenagavalli village in Chikkaballapur district of Karnataka. One person has reportedly sustained injuries. Colombia Coal Mine Blast: 11 Dead, 4 Injured at Accidental Explosion in Cucunuba.

Inspector General of Police (Central Range) M. Chandrashekhar told reporters that the mine in which this incident has taken place, was inspected by the police team led by Superintendent of Police of Chikkaballapur twice in the last fortnight.

(The above story first appeared on LatestLY on Feb 23, 2021 12:55 PM IST. For more news and updates on politics, world, sports, entertainment and lifestyle, log on to our website latestly.com).