The police said after committing the crime, Upendra did not make any attempt to run away and a letter was found from him, claiming he was depressed. The neighbours claimed he was staring at the bodies when they broke into the room. 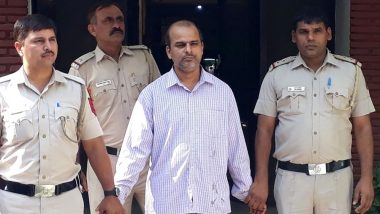 New Delhi, June 22: Upendra Shukla, a tutor, was found sitting in his bedroom amid blood-soaked bodies of his wife and three children -- one of them just a year-and-a-half old -- when the neighbours broke open the door of his house in south Delhi's Mehrauli area on Saturday morning. When his mother's loud knocking of the door went unanswered, the neighbours decided to force their way into the bedroom. Police said Upendra used a hand grinding machine to slit the throats of his wife Archana and children Ichcha, Ronak and an infant son who was yet to be named.

The house where Upendra lived is located in a narrow lane in Ward Two of Mehrauli. The police said after committing the crime, Upendra did not make any attempt to run away and a letter was found from him, claiming he was depressed. The neighbours claimed he was staring at the bodies when they broke into the room. Delhi Shocker: Private Tutor Slits Throats of 4 Family Members Including 2-Month-Old Girl.

"The grandmother (Upendra's mother) requested me to break open the door as Upendra and 'bhabi' (Upendra's wife) were not answering her constant knocking. I cannot forget the scene that I saw when I went inside the room. I was aghast that Upendra did not try to run away -- he was sitting and looking at the dead bodies," said Piyush who lives in the same building.

"I was about to open my shop when Piyush (Upendra's neighbour) came running to me, he was shivering badly and could not speak much, but he asked me to call the police and inform them that Upendra had murdered everyone," Deepak Agarwal, who runs a general store in the same building, told IANS.

The murders have shocked the neighbourhood, not far from Qutub Minar Metro Station. No one is ready to believe if Upendra, a "quiet man", could do something so drastic. The neighbours said Upendra did not have a fighting nature nor was he a trouble-maker. They said the family was also financially stable as he made his living by giving private tuitions.

The family had their own house and just a day ago Upendra had come to Deepak's shop to buy milk and biscuits for his children as he would do as a routine. This is the second shock for the people in Mehrauli as a Kenyan woman was murdered by a Tanzanian woman a few days ago just opposite Upendra's house.

(The above story first appeared on LatestLY on Jun 22, 2019 10:15 PM IST. For more news and updates on politics, world, sports, entertainment and lifestyle, log on to our website latestly.com).