Director, Communicable Diseases, A.K. Singh said that there is neither any medicine nor any vaccine for dengue and therefore, efforts should be made to prevent the mosquito bite. 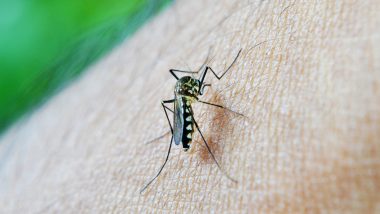 Lucknow, May 17:  The increase in number of dengue cases, ahead of the monsoon season, has put health officials in Uttar Pradesh on alert.

The state's Director General, Health, Vedvrata Singh said that Uttar Pradesh has the required medical infrastructure to counter the outbreak of dengue but the key to prevention was in the hands of the people. Gyanvapi Masjid Survey: 'It Is a Fountain, Not Shivling', Says AIMIM Chief Asaduddin Owaisi.

"There are 70 labs in the state with the facility of dengue testing at the moment and another 88 labs are being developed. Rapid Response (RR) teams have been formed at the block level who will take immediate action. Earlier such teams existed at the district level. At the same time, fever health desks have been established in every hospital," he said.

Director, Communicable Diseases, A.K. Singh said that there is neither any medicine nor any vaccine for dengue and therefore, efforts should be made to prevent the mosquito bite.

Even if the disease affects a person, recovery under medical supervision is possible, he noted.

"If the fever persists, the patient should get tested for dengue. Upon diagnosis, high fluid diet should be taken along with medicines," he said, adding that patients should be saved from dehydration.

(The above story first appeared on LatestLY on May 17, 2022 08:59 AM IST. For more news and updates on politics, world, sports, entertainment and lifestyle, log on to our website latestly.com).