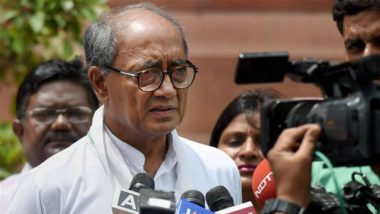 He further said that BJP has no agenda, issues to discuss, other than spreading hatred and instigating people in the name of Hindus and Muslims. Laxmmi Bomb: After Tanishq Ad, Now Akshay Kumar’s Film Is Accused of Promoting ‘Love Jihad’ (View Tweets)

Just a few days ago, another senior Congress leader and Madhya Pradesh chief minister Kamal Nath had made an objectionable and sexist comment against Imarti Devi by using the word "item" against the BJP candidate from Dabra constituency.

The debate around love-jihaad was heated last month when Tanishq released their video ad showcasing the story of a Hindu woman married to a Muslim family. The ad was severely criticised on social media and was touted as 'love jihad'. The noise grew so intense that the brand had to withdraw the commercial.

(The above story first appeared on LatestLY on Oct 30, 2020 10:51 AM IST. For more news and updates on politics, world, sports, entertainment and lifestyle, log on to our website latestly.com).