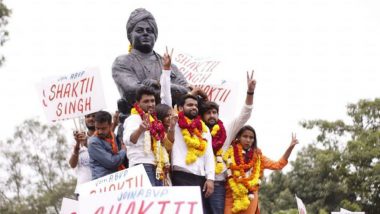 New Delhi, September 20: Days after being elected as the Delhi University Students Union (DUSU) President, Akhil Bharatiya Vidyarthi Parishad's (ABVP) Ankiv Baisoya is caught in a fake degree row. Rival National Students' Union of India (NSUI) has alleged that Baisoya had submitted fake documents to gain admission in the university. According to reports, when asked about his documents, Baisoya said that he studied "several types of subjects” at Thiruvalluvar University in Tamil Nadu’s Vellore from 2013 to 2016, but could not name even a single subject. DUSU Elections Results 2018: ABVP's Ankiv Basoya Wins President Post, Shakti Singh and Jyoti Choudhary Elected as VP & Joint Secretary

Reports say Baisoya, besides not being able to recollect the names of the subjects, failed to name any department head of the University too. Baisoya had obtained admission in DU in Buddhist studies by submitting mark sheets from Thiruvalluvar University. DUSU Elections 2018: ECI Clarifies On Faulty EVMs Used During Polls; Says, 'It Is Not Responsible For Conducting Local Body Polls'

The NSUI has released a letter from Thiruvalluvar University sent in response to a communication from the student’s body. It said that the BA certificate submitted by Baisoya from the university was fake.

The NSUI said that the Thiruvalluvar University clearly refused to have enrolled a student of such name and a marksheet of that serial number is not in their record. The NSUI said they received the certificate through internal sources.

The ABVP has termed the NSUI allegation a propaganda. “NSUI is running its propaganda against Baisoya who has been elected by student mandate. The admissions in DU are granted after due verification of documents of a candidate.

“The document which NSUI is circulating as RTI reply is also fake because it neither has the date nor name of the RTI applicant. Still, if there is any doubt we are open to scrutiny of Ankiv’s documents,” ABVP national media convenor Monika Chaudhary said.

The RSS-affiliated student outfit bagged three posts, including that of the president, in the Delhi University Students’ Union (DUSU) elections last week. Baisoya won the presidential post with a margin of 1,744 votes while ABVP’s Shakti Singh was declared the vice president after he won with a margin of 7,673 votes. NSUI’s Akash Choudhary won the secretary’s post while ABVP’s Jyoti emerged victorious in the joint secretary post.

With inputs from PTI

(The above story first appeared on LatestLY on Sep 20, 2018 01:51 PM IST. For more news and updates on politics, world, sports, entertainment and lifestyle, log on to our website latestly.com).