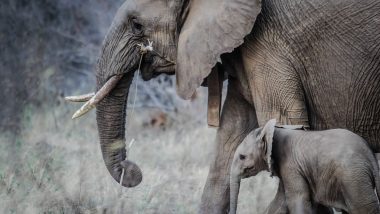 Mandla, November 30: An elephant, named 'Ram', attacked villagers twice in Madhya Pradesh's Mandla district on November 29, leaving two people injured. Elephant Ram went on a rampage in Baisadehi and Bijadandi villages reportedly to take revenge of the death of its pal 'Balram', which got electrocuted in Jabalpur three days ago. Bothe the attacks took place around 48 km away from the spot where Balram got killed. Elephant Herd Kills Forest Guard in Madhya Pradesh, Panic Grips Locals as Second Death Reported in Four Days.

According to a report by TOI, Balram had died after coming in contact with a live electric wire trap laid for poaching wild boars near Mohas area in Bargi Range, about 25km from district headquarters. Balram and Ram had deep bonding and were inseparable. Both the elephants were last seen near Jabalpur’s Mangeli area on November 26. Baby Elephant Hides Behind a Pole When Caught Eating Sugarcanes in Thailand, Adorable Pic is Perfect Example of 'Dumbo Jumbo'.

Apparently enraged over Balram's death, Ram attacked locals. It left Bhagat Singh Baiga, 48, of Baisadehi and Rajkumar, 54, of Bijadandi, wounded. "One was stabbed in the back, another was lifted and flung into the air. The elephant also tried to trample him, but the villager managed to escape," CCF Jabalpur, H D Mehile was quoted as saying. Experts are being called in from Karnataka to capture this wild elephant, the CCF added.

Ram and Balaram had come over from Odisha around two years ago. In April this year, they had killed a villager in Ghansaur tehsil of Seoni when he was collecting mahua flowers.

(The above story first appeared on LatestLY on Nov 30, 2020 01:00 PM IST. For more news and updates on politics, world, sports, entertainment and lifestyle, log on to our website latestly.com).