The 11th round of talks between representatives of over 40 farm unions and the Central government was held on Friday at New Delhi's Vigyan Bhavan to resolve deadlock over the three farm laws enacted by the Centre. The meeting remained inconclusive. 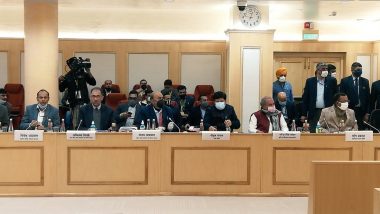 11th round of Farmers' talks with Centre (Photo Credits: IANS)

New Delhi, January 22: The 11th round of talks between representatives of over 40 farm unions and the Central government was held on Friday at New Delhi's Vigyan Bhavan to resolve deadlock over the three farm laws enacted by the Centre. The meeting remained inconclusive as farmers refused to accept the government's proposal of staying the implementation of the three farm laws. Farmers-Government Meet: Agriculture Minister Reportedly Tells Farmer Unions That Govt Can Wait for a Year for Implementation of 3 Farm Laws.

Union Agriculture Minister Narendra Singh Tomar, Railways, Commerce and Food Minister Piyush Goyal and Minister of State for Commerce Som Parkash represented the Centre. After the talks, Tomar said that the farmers' unions only wanted the repeal of the laws. He stated, "Talks remained inconclusive as farmers' welfare was not at the heart of talks from the unions' side. I am sad about it. Farmers unions said that they only want the repeal of the laws despite the govt asking for alternatives." Farmers' Protest: Farmer Leaders Reject Centre's Proposal to Constitute Committee on Farm Laws, Stay Implementation for 18 Months.

We asked them to reconsider our proposal as it is in the interest of farmers and the country. We asked them to convey their decision tomorrow: Union Agriculture Minister Narendra Singh Tomar on the eleventh round of talks between farmer unions and the government https://t.co/3D8Ka2AXfG

After the meeting, Parminder Singh Palmajra, a Bharatiya Kisan Union leader from Punjab, said the farmers will now further intensify the agitation. However, no date for the next round of talks has been decided, and the meeting will be held whenever farmer leaders are ready for a dialogue on the proposal given by the government in the 10th round of talks. Supreme Court Stays Implementation of Three Farm Laws Till Further Orders Amid Farmers' Protest, Forms 4-Member Committee.

The previous rounds of talks between the government and farmers also failed to reach any concrete results, as protesting unions have stuck to their main demand for repealing the new farm laws, but the government has refused to do so. Farmers will take out tractor march on January 26 at Delhi's outer ring road in protest against the laws.

The laws were enacted by the Centre in September last year. The laws triggered nation-wide protest by farmers, especially from Punjab and Haryana. Farmers fear that the new laws would dilute the minimum support price (MSP) by destroying APMCs.

(The above story first appeared on LatestLY on Jan 22, 2021 07:23 PM IST. For more news and updates on politics, world, sports, entertainment and lifestyle, log on to our website latestly.com).