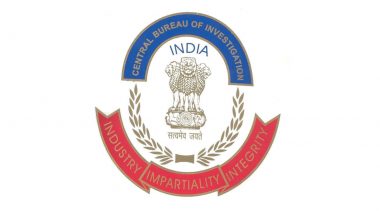 New Delhi, May 10: The CBI on Tuesday raided 40 places across the country and detained seven Union Ministry of Home Affairs officials for allegedly taking bribe from NGOs in lieu of helping them in renewal of Foreign Contribution (Regulation) Act registrations.

A Central Bureau of Investigation (CBI) source said that a hawala connection has also been exposed in the raids through which they sent around Rs 2 crore.

"We have detailed few MHA officials for allegedly helping NGOs which were issued notices for FCRA violation or those seeking renewal of FCRA registration. FCRA is mandatory to receive foreign funds. Around 40 locations have been raided so far," the source told IANS.

A case under various sections of IPC read with sections of Prevention of Corruption Act has been lodged in this respect.

The CBI sources said that more arrests in the case are likely.

(The above story first appeared on LatestLY on May 10, 2022 09:39 PM IST. For more news and updates on politics, world, sports, entertainment and lifestyle, log on to our website latestly.com).