Hathras: Woman, Whose Father Was Killed by Her Alleged Molester, Seeks License to Keep Gun

A woman, whose father was killed by her alleged molester in Hathras district of Uttar Pradesh, has sought license to purchase and keep a gun. 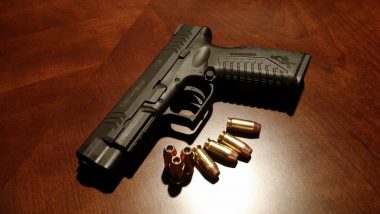 Hathras, March 6: A woman, whose father was killed by her alleged molester in Hathras district of Uttar Pradesh, has sought license to purchase and keep a gun. She said she fears for her life as Gaurav Sharma, the man accused of molesting her and killing her father, has not been arrested. She also appealed to Chief Minister Yogi Adityanath to nab the killer.

Talking to a newspaper, the woman said: "He has not been arrested even after five days of the incident. I am feeling scared. Anything could happen with us." "I need a firearm for my survival. As of now, I have police security but what would happen tomorrow when the security will be withdrawn," she asked. Her father filed a molestation case against Sharma in 2018. Uttar Pradesh CM Yogi Adityanath Directs Officials To Invoke NSA Against Accused in Hathras Murder Case.

He was jailed for a month in 2018. Later, a local court had granted him bail. On the evening of March 1, a heated argument took place between the family of the woman and the accused outside a temple in Nozarpur village. Sharma allegedly opened fire at the victim's father, who died on the way to hospital. Police have arrested three accused - Lalitesh Sharma, Rohitash Sharm and Nikhil Sharma.

(The above story first appeared on LatestLY on Mar 06, 2021 12:24 PM IST. For more news and updates on politics, world, sports, entertainment and lifestyle, log on to our website latestly.com).