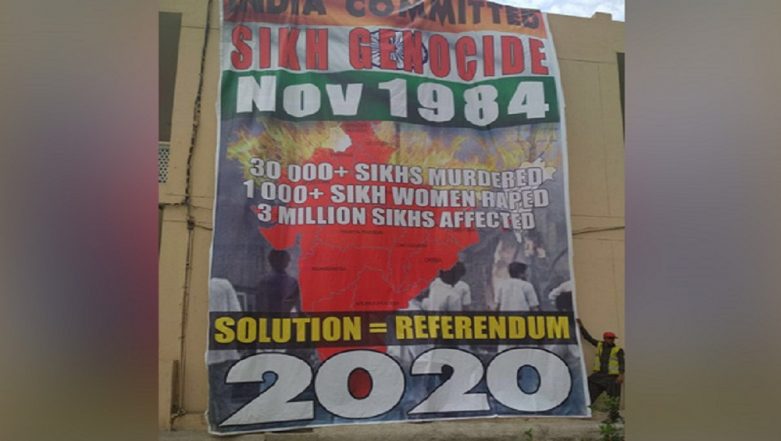 New Delhi, July 12: India is going "with high expectations" for the Kartarpur corridor meeting on Sunday and is expected to raise with the Pakistani side several issues, including the presence of pro-Khalistani leader Gopal Singh Chawla on a panel associated with the project.

The first round of talks was held on March 14 on the Indian side of the Attari-Wagah border and the second round is scheduled for July 14 (Sunday) at Wagah, on the Pakistani side. SFJ Burns Indian Flag, Threatens to Hoist Khalistan Flag in Different Countries on August 15, in Retaliation to Indian Ban.

The second round of talks was originally scheduled on April 2 but India raised objections to pro-Khalistani leader Chawla being linked to the Kartarpur project.

According to sources, India is well on its way to completing the project by October 31. It will be thrown open to pilgrims in November to mark the 550th birth anniversary celebrations of Guru Nanak Dev, the founder of Sikhism.

So far, India has completed 60 per cent of a four-lane highway that will connect the Zero point of the Kartarpur corridor to the national highway, while the foundation work of a state-of-the art passenger terminal is nearing completion and the terminal will be ready by October end.

The corridor will allow pilgrims to travel from Dera Baba Nanak shrine in India's Gurdaspur district to Gurdwara Darbar Sahib at Kartarpur in Pakistan, the final resting place of Guru Nanak Dev.

The Kartarpur gurdwara is located in Pakistan's Narowal district across the Ravi, about four kilometres from the Dera Baba Nanak shrine in Gurdaspur.

However, going by the size of the facilities being constructed by Pakistan, a question mark remains on whether it will be able to cater to the volume of traffic, said sources.

According to sources, the issues to be discussed at the Sunday meeting would include who can visit the Kartarpur shrine, how they can move across the corridor, the documentation required -- will it be visa free, and what are the facilities to ensure the movement is smooth, safe and unhindered.

The other issues to be taken up would be how the pilgrims are required to travel, in groups or individually, and the choice of transport -- whether by foot or bus.

"We are going for the meeting with high expectations. Our side of the corridor will be ready and we hope the other side is coming up with matching response," the sources said.