The Railways claimed that such news are false and leading to panic and speculations, adding that a final decision as to when the train services would commence, is yet to be taken. 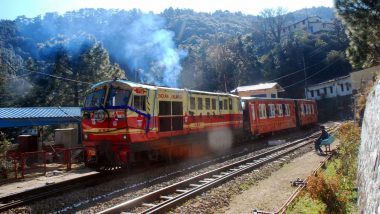 Mumbai, April 10: The Indian Railways on Friday debunked all the fake news and rumours related to starting of rail services from a particular date. In its statement, the Ministry of Railways said that in the last two days, there are media reports on protocols of prospective travellers by trains which mentions number of trains starting from a date. The Railways claimed that such news are false and leading to panic and speculations. It added saying that a final decision as to when the train services would commence, is yet to be taken.

The Railways added that post lockdown, the Indian Railways will take the best feasible decisions for rail users in the interest of all stake holders including its prospective passengers. The Ministry added that as and when a decision is taken, all concerned would be intimated about it.

"It may be brought to the notice of media that final decision regarding above matters is yet to be taken and pre-mature reporting on such matters is leading  to unnecessary and avoidable speculation in the minds of public in such extraordinary times", the official release stated. The Ministry urged media publications to avoid publishing on the basis of unconfirmed or unverified matters which may lead to such speculation.

There are media reports on protocols etc of prospective travellers by trains.They have also been mentioning number of trains starting from a date. Final decision yet to be taken&pre mature reporting leading to unnecessary speculation in public in such times: Ministry of Railways pic.twitter.com/ifQVDuDEUF

Earlier, the Indian Railways had announced stopping all the trains, except the goods trains, till March 31 in the view of the increasing number of coronavirus patients in the country. However, after Prime Minister Narendra Modi's announcement of a 21 day lockdown,  the Railways announced that its suspension of all passenger services will continue till April 14. However, freight movement will continue to carry essential commodities across the country, officials said.

In the wake of suspension of train services, the Indian Railways announced relaxation in the time limit prescribed for passengers to stay in its retiring rooms. It said that the relaxation shall be in force till normal train services resume.

(The above story first appeared on LatestLY on Apr 10, 2020 03:56 PM IST. For more news and updates on politics, world, sports, entertainment and lifestyle, log on to our website latestly.com).