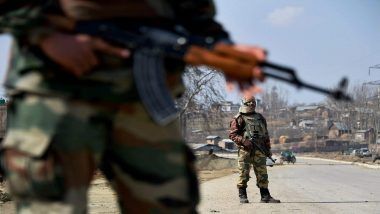 Jammu, March 25: Two Central Reserve Police Force (CRPF) personnel were martyred on Thursday after terrorists attacked a CRPF party in Lawaypora area on the outskirts of Srinagar city. According to details by CRPF PRO, the martyred jawan has been identified as ASI Manga Ram Barman. He was from Tripura. According to details by IG Kashmir Vijay Kumar, LeT involved in this attack. The injured CRPF constables include Nazim Ali, Jaganath Ray and Ashok Kumar.

Giving details about the attack, CRPF DIG Kishore Prasad said that around 3:45 pm, a patrol party unit was attacked by terrorists following which the area has been sealed. "One CRPF personnel has lost his life and three others sustained injuries. It was a hit and run attack. Soon they will be either arrested or killed", Prasad said. Jammu and Kashmir: Four Lashkar-e-Taiba Militants Killed in Shopian Encounter.

The injured were immediately rushed to the hospital for treatment. The additional forces have reached the spot, the area cordoned off and an operation launched to nab the terrorists. Reports inform that the area, which has witnessed several attacks on security forces and encounters with militants in recent years, has been cordoned off, the official said.

(The above story first appeared on LatestLY on Mar 25, 2021 06:39 PM IST. For more news and updates on politics, world, sports, entertainment and lifestyle, log on to our website latestly.com).