Kinnaur Landslide: Death Toll Rises to 10 & Over 25 Feared Trapped, Centre Assures All Possible Support In Rescue Operation; Here's What We Know So Far

The death toll have risen to 10, while around 25-30 people are still reported to be trapped under the debris of a major landslide in Himachal Pradesh's Kinnaur district on Wednesday. The landslide occurred on the National Highway 5, near 61 km from Reckong Peo, the district headquarters of Kinnaur. 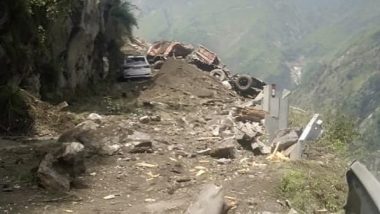 Kinnaur, August 11: The death toll have risen to 10, while around 25-30 people are still reported to be trapped under the debris of a major landslide in Himachal Pradesh's Kinnaur district on Wednesday. The landslide occurred on the National Highway 5, near 61 km from Reckong Peo, the district headquarters of Kinnaur. Several vehicles, including a state roadways bus, got buried in the landslide. Ressue operation is currently underway. A total of 14 people have been rescued so far. Himachal Pradesh Chief Minister Jairam Thakur expressed grief over the demise of the people in the landslide.

According to reports, the Himachal Road Transport Corporation (HRTC) bus was on its way to Hardwar from Rekong Peo via Shimla when the landslide occurred. There are reported to be more than 40 passengers in the bus. However, there is no official confirmation in this regard.  Thakur asked the Kinnaur district authorities to speed up the relief and rescue operations. Kinnaur Landslide: ITBP Personnel Reach Landslide Site on Reckong Peo-Shimla Highway Near Nugulsari.

Video Of Rescue Operation By ITBP:

#WATCH | ITBP personnel rescue a man trapped in the debris of a landslide on Reckong Peo-Shimla Highway in Nugulsari area of Kinnaur, Himachal Pradesh

As per the state govt's latest information, nine people have been rescued & one person has died. Search operation is underway pic.twitter.com/NZ46tpg1Se

The Himachal Pradesh CM said, "The exact casualties in the landslide are yet to be ascertained. Sensing the gravity of the situation, the NDRF (National Disaster Response Force) has been summoned for rescuing the people." The National Disaster Response Force (NDRF), Indo-Tibetan Border Police (ITBP) and Central Industrial Security Force (CISF) are jointly conducting the rescue operation. Four people have been rescued so far.

I've directed police and local administration to carry out rescue operations. NDRF has also been put on alert. We have received information that one bus and a car could have been hit; awaiting detailed information: Himachal Pradesh CM Jairam Thakur on Kinnaur landslide incident pic.twitter.com/GNNZsSyJnG

ITBP Personnel of the 17th battalion, the 19th battalion and the 43rd battalion have reached the spot. The ITBP, in a statement, said, "4 vehicles including a bus and a truck reported trapped in the rubble. Casualties feared."

Prime Minister Narendra Modi and Union Home Minister Amit Shah spoke to Thakur to take stock of the situation. The Centre assured all possible support in the ongoing rescue operations. Meanwhile, sliding and shooting stones are continuing. The ITBP spokesperson said that rescue teams are waiting for one more hour for the shooting stones to stop.

Heavy rainfall has caused landslides in Himachal Pradesh. Last month also, nine tourists lost their lives after the Basteri bridge collapsed as a result of boulders rolling down a hill due to a landslide in another part of the Kinnaur district. Three others also got injured. On July 26, a massive landslide was also reported in the district. The incident occurred near the Kinnaur-Kaza national highway. However, no casualties were reported.

(The above story first appeared on LatestLY on Aug 11, 2021 06:59 PM IST. For more news and updates on politics, world, sports, entertainment and lifestyle, log on to our website latestly.com).