The wreckage of the bus that fell into a 500-metre deep gorge in Himachal Pradesh's Kinnaur district following a massive landslide was recovered on Thursday morning, rescuers said. Fifteen people lost their lives so far, while 20 others were still missing. 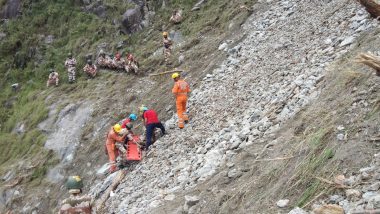 Shimla,    Aug 12:         The wreckage of the bus that fell into a 500-metre deep gorge in Himachal Pradesh's Kinnaur district following a massive landslide was recovered on Thursday morning, rescuers said. Fifteen people lost their lives so far, while 20 others were still missing.

A rescue operation involving multiple agencies was underway to retrieve over 20 people feared trapped in the 200-m stretch covered with rubble.

Himachal Pradesh Landslide: Over 40 Feared Buried Under Debris After Major Landslide in Kinnaur.

The landslide on Tuesday buried a truck, a state roadways bus, and other vehicles that occurred over a stretch of the Shimla-Reckong Peo highway near Nigulsari, some 180 km from the state capital.

"Wreckage of the bus found by ITBP troops of 17, 18 and 43 Battalions at first light (0525 Hrs) at approximately 500 metres below the road and 200 meters above Sutlej river. One more dead body retrieved. Total 11 dead bodies retrieved till now," the Indo-Tibetan Border Police (ITBP) said in a tweet.

He said the highway is still closed for the traffic.

The Himachal Road Transport Corporation bus was on its way to Haridwar from Rekong Peo via Shimla. Its driver and conductor escaped unhurt.

Relatives of the missing bus passengers approached the local authorities to know about their whereabouts. Most of the victims belong to Kinnaur district.

"A few boulders started rolling down just ahead of the disaster. Sensing trouble, I ran towards the other side and managed to save myself," a survivor said.

Witnesses said the administration had a tough time extricating the victims from the badly-mangled bus.

It took hours for rescuers to climb down the mountain and bring up the bodies. Even the rainfall and time and again landslips on Tuesday hampered the rescue operation, police officials said.

Kinnaur is one of remotest places in the state and scarcity and low frequency of passenger buses in the district leads to overcrowding of the vehicles.

Prime Minister Narendra Modi and Union Home Minister Amit Shah spoke to Thakur and assured him of all possible help.

This is the second major natural disaster in Kinnaur in less than a month. Nine people, most of them tourists, were killed by a landslide as boulders fell and hit the vehicle they were travelling in on July 25.

Seven people died in the exceptionally high rainfall across the cold desert of Lahaul-Spiti district on July 27-28.

Keylong and Udaipur subdivision of the district faced 12 incidents of flash flood after a cloudburst, in which the Tozing Nallah's impact was devastating.

(The above story first appeared on LatestLY on Aug 12, 2021 10:46 AM IST. For more news and updates on politics, world, sports, entertainment and lifestyle, log on to our website latestly.com).