A sculpture of Lord Krishna (Laddoo Gopal) has gone "missing" from the Banke Bihari temple in Vrindavan. 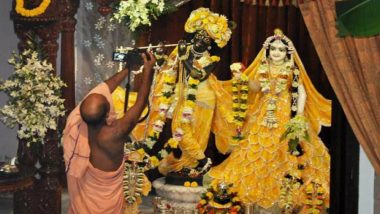 Mathura, April 5: A sculpture of Lord Krishna (Laddoo Gopal) has gone "missing" from the Banke Bihari temple in Vrindavan.

The Delhi-based business family that had taken the deity for 'darshan' to the temple, have announced a cash reward of Rs 11,000 to the person who finds it for them.

Bhavya Gupta, a software engineer came with her mother to Barsana to celebrate Holi on March 23. Her father runs a wholesale business of cold drinks in Delhi.

"We have been offering prayers to Laddoo Gopal (the child form of Lord Krishna) for the past 27 years. On March 24, we took 'Laddoo Gopal' for 'darshan' at the Banke Bihari temple. It went missing from there.

"Since then, we have been searching for it. When we failed to locate our Laddoo Gopal, we decided to announce a cash reward and pasted posters in Vrindavan," Bhavya said.

(The above story first appeared on LatestLY on Apr 05, 2021 09:41 AM IST. For more news and updates on politics, world, sports, entertainment and lifestyle, log on to our website latestly.com).