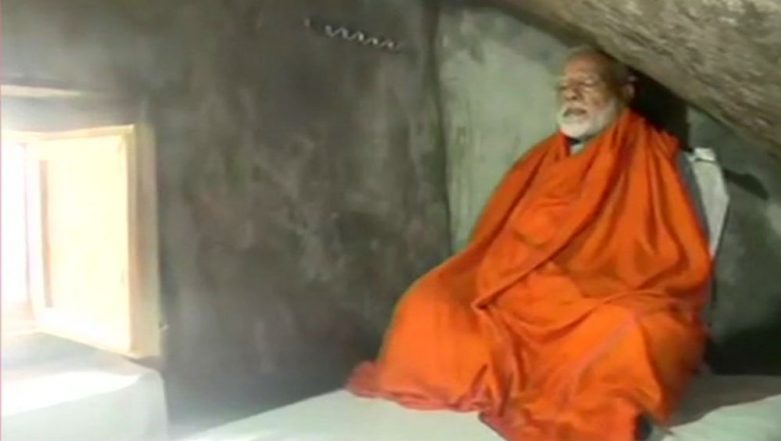 Kedarnath, May 19: After the end of hectic 2019 Lok Sabha elections campaigning, Prime Minister Narendra Modi travelled to hill state Uttarakhand. PM Modi on Saturday visited Kedarnath shrine and offered morning prayers. After reviewing re-development projects in the sanctum sanctorum, the premier mediated at a holy cave near Kedarnath temple. According to a report in Navbharat Times, the cost of accommodating inside the 'dhyan gufa' is Rs 990 per night. PM Narendra Modi Meditates at Holy Cave Near Kedarnath Shrine, See Pictures.

The booking can be made only through the official site and a person can book cave for three days. The Garhwal Mandal Vikas Nigam (GMVN), which developed Rudra meditation cave, had reduced the price to Rs 990 after a low response from tourists last year due to the high tariff (Rs 3000). PM Narendra Modi Offers Prayers at Kedarnath Shrine in Uttarakhand.

The cave is located in a remote area to encourage meditation. At a time, only one person is allowed in the cave. Even though the cave offers complete isolation, a phone is installed in the cave in case of emergency.

According to reports, the cave, where PM Modi meditated in a saffron robe, also have wifi service and electricity. The cave also offers breakfast, lunch, dinner and tea two times a day. “We conduct a medical check-up of the person interested in staying at the cave to ensure they are physically fit. An attendant will also be available 24x7 who can be summoned by ringing the bell inside the cave,” said BL Rana, general manager of GMVN.

Meanwhile, after meditating for 17 hours, PM Modi on Sunday offered prayers at Badrinath Temple. Notably, this is Modi's fourth visit to the temple dedicated to Lord Shiva in the last two years. The gates of Kedarnath and Badrinath shrines reopened earlier this month after the winter break.