Migrant Worker Walks 2,000 Kilometres For 12 Days to Reach UP From Bengaluru, Dies of Snakebite After Reaching Home 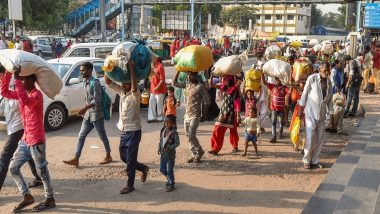 Uttar Pradesh, June 2: In a tragic incident, a 23-year-old migrant worker after walking 2,000 kilometres for 12 days from Bengaluru to his home town in Uttar Pradesh died after being bitten by a snake. According to a Times of India report, the young man after reaching his village in Gonda district gave his mother a hug and had stepped into the field to wash up after his long journey. It was then that he was bitten by the snake.

His mother has been into a shock as he was eagerly waiting for his son to return. The decision to walk several kilometres was taken after his contractors didn't pay him and others for two months. They walked by the night to dodge the cops and after he finally reached UP, he was taken to the quarantine centre where he stayed for a few days. On May 26, he finally reached home and everyone was ecstatic to see him. He stepped on to the fields and was found dead within an hour. Chhattisgarh: Migrant Worker Dies of Snake Bite At Quarantine Centre in Rajnandgaon District.

In a similar incident, a migrant labourer died after a snake bit him at a quarantine facility in Chhattisgarh's Rajnandgaon district. In another incident, a migrant worker staying at Odisha's Balangir district was bitten by a snake. He was bitten by the snake while he was sleeping in a quarantine home. He recovered as he was immediately admitted to a government hospital.

(The above story first appeared on LatestLY on Jun 02, 2020 09:34 AM IST. For more news and updates on politics, world, sports, entertainment and lifestyle, log on to our website latestly.com).