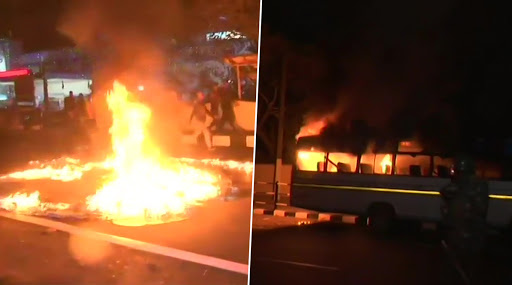 Guwahati, December 11: With the protest over the Citizenship Amendment Bill 2019 in the North-East gaining momentum and the region boiling under the rage of residents, the state administration had suspended the mobile internet in ten districts of Assam for 24 hours. The internet ban would be effective from 7 pm today to 7 pm tomorrow.

According to the details pouring in, the suspension on mobile internet has been imposed in Lakhimpur, Tinsukia, Dhemaji, Dibrugarh, Charaideo, Sivasagar, Jorhat, Golaghat, Kamrup (Metro) and Kamrup districts of Assam. Apart from this, District Magistrate of Dibrugarh has ordered the closure of liquor licensed premises from 4 pm today for 'preservation of public peace and tranquillity'. Curfew in Guwahati Extended Indefinitely as Protests Against Citizenship Amendment Bill Turn Violent.

Due to the violent protests by the residents over CAB 2019, Assam Chief Minister Sarbananda Sonowal was stuck at Guwahati airport, informed CMO. Guwahati Police Chief Deepak Kumar stated that on Wednesday there had been protests at 20 places. Meanwhile, the Indian Army informed that it had deployed its one column on standby in Assam, while two columns deployed in Tripura are troops of Assam Rifles. Earlier on Tuesday, Chief Minister Biplab Deb-led state government in Tripura had imposed similar prohibition from 2 pm onwards in the state, citing violent protests and circulation of 'fake' messages on social media.