Monsoon 2021 Forecast: Odisha, Andhra Pradesh Brace for Heavy Rainfall Till August 17, Rainfall Activity To Reduce in UP and Bihar

A cyclonic circulation is likely to form over west-central and adjoining northwest Bay of Bengal around August 15, the IMD said, adding that it may form into a Low-Pressure Area over the same region during subsequent 48 hours. 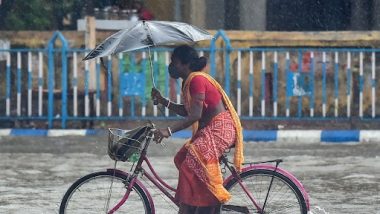 New Delhi, August 14: Heavy rainfall is expected to lash parts of Odisha,  Andhra Pradesh, Telangana, and Chhattisgarh over the next few days, the India Meteorological Department (IMD) said in its latest weather forecast on Saturday. In its all-India weather bulletin, the IMD said that widespread rainfall activity is likely over Odisha, Coastal Andhra Pradesh, Telangana, Vidarbha, and Chhattisgarh till August 17. "Isolated heavy to very heavy falls are likely over Odisha during 15th-17th and isolated heavy falls over Coastal Andhra Pradesh during 14th-17th", the IMD said.  Lightning Facts and Risks: How is Lightning Caused? Check Dos and Don’ts That You Should Follow to reduce Risk During Lightning Strike.

The IMD said strong southwesterly winds from the Bay of Bengal to Northeast India are likely to continue during the next 2 days. The rainfall activity in these regions is due to a cyclonic circulation over interior Odisha which runs up to north Tamil Nadu at lower tropospheric levels. The IMD said that another cyclonic circulation lies over Westcentral Bay of Bengal off north Andhra Pradesh coast in mid and upper tropospheric levels.

Giving details about the progress of monsoon in parts of India, the IMD said that the western end of the Monsoon trough lies close to the foothills of the Himalayas and the Eastern end is near its normal position. Due to the current weather conditions, heavy to very heavy rainfall is very likely to continue over Northeast India, West Bengal and Sikkim on August 14 and reduction thereafter. Also, heavy rainfall is very likely to continue over Uttar Pradesh & Bihar on August 14 and reduce thereafter.

Moreover, a cyclonic circulation is likely to form over west-central and adjoining northwest Bay of Bengal around August 15, the IMD said, adding that it may form into a Low-Pressure Area over the same region during subsequent 48 hours.

(The above story first appeared on LatestLY on Aug 14, 2021 09:15 AM IST. For more news and updates on politics, world, sports, entertainment and lifestyle, log on to our website latestly.com).