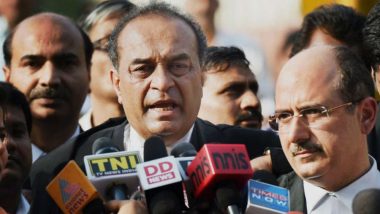 New Delhi, July 1:  Mukul Rohatgi, former Attorney General of India, on Wednesday refused to appear for TikTok, a Chinese video-sharing social networking service which has been banned by the government of India. According to a tweet by ANI, Rohatgi said he won't appear for the Chinese app against the Government of India. On July 29, the government banned 59 Chinese mobile apps including hugely popular TikTok, saying they were prejudicial to sovereignty, integrity and security of the country. Reports inform that a formal order asking phone companies to block the applications is being issued.

On Tuesday, TikTok India issued a statement saying that the data of all Indian users is safe and has not been shared with any foreign government. TikTok India head Nikhil Gandhi said the firm will comply with all data privacy and security requirements under the laws laid down by the government of India. "We place the highest importance on users privacy and integrity", the statement said. TikTok, UC Browser Among 59 Chinese Apps Banned by Govt of India Amid Row With China, See Full List.

Mukul Rohatgi, former Attorney General of India, refuses to appear for Tik Tok, says he won't appear for the Chinese app against the Government of India. (file pic) pic.twitter.com/Pds2ZuUDii

The ban comes in the backdrop of the stand-off along the Line of Actual control in Ladakh with Chinese troops. The government said that on the basis of these and upon receiving of recent credible inputs that such Apps pose threat to the integrity of India, it decided to disallow the usage of certain Apps, used in both mobile and non-mobile Internet enabled devices. The decision has been taken to safeguard the interests of crores of Indian mobile and internet users.

(The above story first appeared on LatestLY on Jul 01, 2020 12:14 PM IST. For more news and updates on politics, world, sports, entertainment and lifestyle, log on to our website latestly.com).