Union Finance Minister Nirmala Sitharaman quashed reports of liquidity crunch after meeting with private bank CEOs and announced that the first round of the outreach programme would take place in 250 districts from October 3 to October 7. 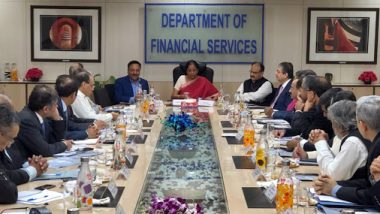 New Delhi, September 26: Weeks after the heading the public sector banks CEOs' meeting and announcing the bank mergers, Union Finance Minister Nirmala Sitharaman on Thursday stated that there is no liquidity crunch and announced that the first round of the outreach programme will take place in 250 districts from October 3 to October 7. She said that under this, the ministry would work with Non-Banking Financial Companies (NBFCs) and Home Financing Companies (HFCs) to leverage the liquidity.

Addressing a press conference in the national capital after chairing a meeting with Private Sector Banks and financial institutions in New Delhi, the Union Finance Minister stated, "I have not heard liquidity as a problem from any of those (in the meeting) present." She mentioned small finance banks seem to be going on a smooth map and the outreach programme would provide relief to homebuyers stuck in incomplete projects totalling nearly 3.5 lakh units across the country. Nirmala Sitharaman Asks Banks to Give Preference to Fresh Loan Applicants After Mergers Come Into Effect, Announces 200 Loan Melas.

Apart from this, the FM stated her ministry is working to help the ailing auto sector, while she mentioned that the slowdown is a cyclical problem and expected that the problem would be solved in next two-three quarters. She said, "Commercial vehicle-related problem is seen as a cyclical problem. Private bankers and NBFCs feel that it will be taken care of in one or two quarters. Passenger vehicles demand is largely sentiment related, which should weather over. Any problem in liquidity would be seen in wholesale financing."

On the service sector, she said, "The service sector is showing a very high appetite for credit, and since it contributes to more than 50 percent, there is an immense possibility to reach out to them." However, she pointed out that she had recieved a request to raise the affordable housing scheme to limit up to Rs 50 lakh from Rs 45 lakh. Corporate Tax Slashed For Domestic Companies, Existing And Fresh; Nirmala Sitharaman Announces New Rates.

Considering the case that private banks do not come under the ambit of the Insolvency and Bankruptcy Code (IBC), the Finance Minister was of the opinion that measures should be taken to being them under IBC so that liquidity crunch issue can be sorted out. This is the second biggest meeting after the bank mergers.

(The above story first appeared on LatestLY on Sep 26, 2019 08:25 PM IST. For more news and updates on politics, world, sports, entertainment and lifestyle, log on to our website latestly.com).