Suspended BJP leader Nupur Sharma, on Saturday, once again refused to adhere to the summons from a police station in Kolkata. 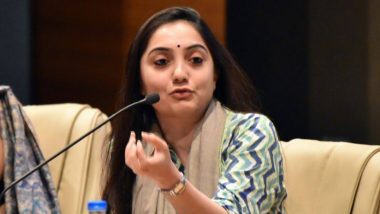 Kolkata, June 25: Suspended BJP leader Nupur Sharma, on Saturday, once again refused to adhere to the summons from a police station in Kolkata.

According to the summons issued by Amherst Street police station under the north and north suburban police station under Kolkata Police, Sharma was supposed to be present at said police station on Saturday afternoon. However, a letter from Sharma reached the Kolkata Police through email on Saturday, where she has sought some more time to appear as she apprehends security threat if she comes to the city. Nupur Sharma, Who Made Controversial Remarks Against Prophet Muhammad, Should Be Forgiven as Per Islam, Say Jamaat Ulama-e-Hind.

This is the second time that Sharma has ignored the summons from the city police. Earlier, she was sent a notice from the Narkeldanga Police station under Kolkata Police's eastern suburban division where she was asked to be present at the said police station on June 20. However, at that time too, she refused to turn up at the last moment citing security reasons.

Soon after Sharma's controversial comments on Prophet Muhammad went viral, there were severe tensions in a number of minority - dominated pockets in West Bengal districts like Howrah, Nadia and Murshidabad.

Clashes erupted between the agitators and the police in which Domjur Police station in Howrah district was attacked, police vehicles were torched and several police personnel were injured. Internet services were also suspended for a few days in a number of pockets to arrest the spread of rumours.

Following countrywide tension over the controversial comments, the BJP suspended her from the party. The BJP also took action against Delhi leader Naveen Kumar Jindal who shared her comments on Twitter.

(The above story first appeared on LatestLY on Jun 25, 2022 01:50 PM IST. For more news and updates on politics, world, sports, entertainment and lifestyle, log on to our website latestly.com).