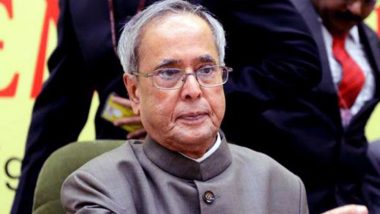 New Delhi, August 26: Former President Pranab Mukherjee health continues to be critical. According to the medical bulletin by Army Hospital, Mukherjee's renal parameters are slightly deranged since Tuesday. He continues to be in a state of deep coma and on ventilator support.

Former President is being treated for a lung infection. He underwent critical brain surgery at the hospital to remove a clot after he suffered a fall at his Rajaji Marg residence on August 10. He is on ventilator support since then. Pranab Mukherjee Tests COVID-19 Positive: West Bengal CM Mamata Banerjee Wishes Former President Speedy Recovery.

Former President Pranab Mukherjee is being treated for lung infection. His renal parameters are slightly deranged since yesterday. He continues to be in deep coma and on ventilator support: Army Hospital (R&R), Delhi Cantt

He had also informed people on Twitter that he had also tested positive for the coronavirus disease (Covid-19) at the time of his admission. He later developed a respiratory infection. Mukherjee served as the 13th President of India from 2012 to 2017.

(The above story first appeared on LatestLY on Aug 26, 2020 11:43 AM IST. For more news and updates on politics, world, sports, entertainment and lifestyle, log on to our website latestly.com).