Rafale Fighter Jets Land in India: Water Salutes Given to Aircraft After Landing At Ambala Airbase in Haryana; Watch Video 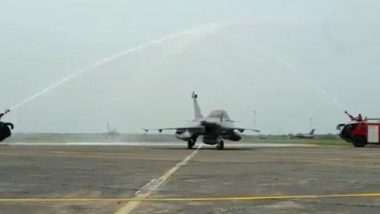 Ambala, July 29: The first batch of five Rafale fighters jet arrived in India on Wednesday. Water salutes were given to the aircraft after their landing at the Indian Air Force airbase in Ambala, Haryana. These Rafale jets landed at Ambala airbase at around 3:15 pm in comparison to their earlier scheduled time of 2 pm today. The delay was reportedly due to the weather conditions, which included cloudy skies.

Soon after its landing, Defence Minister Rajanth Singh tweeted that the birds have safely landed in India. He mentioned that if it is anyone who should be worried about or critical about this new capability of the Indian Air Force, it should be those who want to threaten India's territorial integrity. Rafale Fighter Jets Land in India: Defence Minister Rajnath Singh Says 'Birds Have Landed Safely in Ambala'.

Water Salutes Given to Aircraft After Landing At Ambala Airbase in Haryana, Watch Video:

The formal induction ceremony of the aircraft would be held later. Section 144 was imposed in the adjoining areas of Ambala Airbase due to the scheduled landing of Rafale jets. It is a 4.5 generation aircraft. Rafale jets are equipped with a wide range of weapons which can do preventive tactical bombing and attack ground targets against the enemy, even strike at ships and perform nuclear deterrence missions.

(The above story first appeared on LatestLY on Jul 29, 2020 04:16 PM IST. For more news and updates on politics, world, sports, entertainment and lifestyle, log on to our website latestly.com).