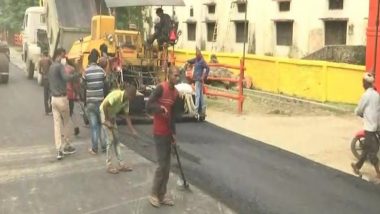 Ayodhya: August 2: Preparations, including a cleanliness drive and sanitisation, are underway in Ayodhya ahead of the foundation laying ceremony of the Ram Temple on August 5, which will witness the attendance of several national leaders including Prime Minister Narendra Modi. People were seen cleaning the roads, markets and ghats.

According to the police, the security arrangements for the foundation stone-laying ceremony have been put in place and people are being requested to refrain from gathering at a place. Ayodhya Deputy Inspector General of Police (DIG) Deepak Kumar said, "Barricades are being set up at 12 places across Ayodhya. Protocols for the security of Prime Minister Narendra Modi will also be followed during his visit to Ayodhya. COVID-19 protocols are also being followed. Ram Temple 'Bhoomi Poojan' in Ayodhya: Asaduddin Owaisi Invited by Telangana BJP Leader Krishna Sagar Rao.

Kumar said that more than five people will not be allowed to gather and added that shops will be allowed to remain open in the city. "We are continuously keeping a watch across the VIP routes via drones. No restrictions on movement for the people residing in Ayodhya. I urge people not to step outdoors to contain COVID-19. We will not let outsiders enter the city," he said.

Several areas in Ayodhya are being illuminated with diyas (earthen lamps) and colourful lights. According to potters in the state, around 1.25 lakh diyas were ordered for the highly anticipated ceremony on August 5.

The Prime Minister is scheduled to lay the foundation stone of the Ram Temple in Ayodhya on August 5, according to Mahant Nritya Gopal Das, the president of the Sri Ram Janmabhoomi Teertha Kshetra Trust. Ram Temple Foundation Stone Laying Ceremony in Ayodhya: LK Advani, Murli Manohar Joshi Yet to Get Formal Invites, May Attend 'Bhoomi Pujan' Via Video Conference.

The construction of the Ram temple will begin after the ceremony to lay the foundation stone in which Chief Ministers of several states, Ministers from the Union Cabinet and RSS chief Mohan Bhagwat are also likely to participate.