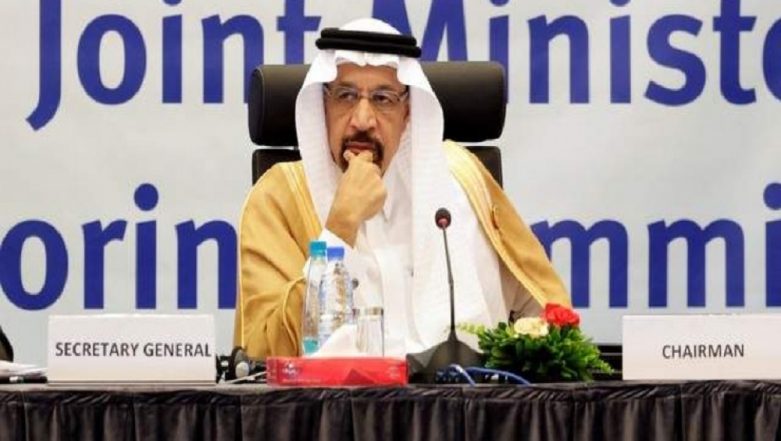 New Delhi, July 25: India on Thursday expressed concern over developments in the Strait of Hormuz impacting movement of crude oil and LNG tankers, and sought the world's top oil exporter Saudi Arabia's active role in keeping rates at reasonable levels. Saudi Energy Minister Khalid al-Falih made a brief visit to India and then flew to China as the OPEC kingpin tried to get the top oil buyers involved in securing ships through the narrow strait that links oil producers to the rest of the world.

"Raised my concerns on the recent increase in Asian Premium, disturbances in the Strait of Hormuz impacting the movement of oil/LNG tankers and the decision of OPEC Plus members on extending production cuts leading to oil price volatility & its adverse impact on the Indian economy."

India faces the biggest impact of the current tensions in the Strait of Hormuz as it depends heavily on the region for its oil and gas supplies. Two-thirds of the oil and half the liquefied natural gas (LNG) India imports come from the strait between Iran and Oman. Eighteen million barrels of oil pass through the Strait of Hormuz every day, accounting for one-third of the global oil trade. Besides, one-third of the world's LNG trade also passes through the strait.

On June 13, two oil tankers in the strait were damaged by explosions, an attack which the US blamed on Iran. Iran has denied any involvement. The attacks were seen by some as a response to the US tightening its sanctions on Iran.

Since then, Indian ships passing through there have taken the assistance of the Indian Navy escort to safely pass through the waterway.

Sources said Saudi Arabia wants the top oil buyers China and India to get actively involved in securing the ships that carry crude oil and LNG to them. This is being seen as an attempt by the OPEC kingpin to counter its arch-rival in the region, Iran.

"Requested Saudi Arabia to continue its leadership role in maintaining the oil market balance. Urged H.E @Khalid_AlFalih to address the issue of Asian Premium for transparency in the global oil market, also advocated for responsible pricing in the larger interest of all nations," Pradhan said in another tweet.

India is 84 per cent dependent on imports to meet its oil needs. Two-thirds of its imports comes from the Middle-East region, with Iraq being the top supplier, followed by Saudi Arabia. It also buys some crude oil and cooking gas (LPG) from the UAE.

India has time and again warned oil producers that higher crude prices are hurting global economic growth and they should do more to bring down rates to reasonable levels. Volatility in oil prices has resulted in a see-saw in retail petrol and diesel prices, with rates rising on some days and falling on others.

Prime Minister Narendra Modi in 2015 had set a target of reducing India's oil dependence by 10 per cent to 67 per cent by 2022 (from 77 per cent in 2014-15). However, import dependence has only increased since then and the government is now looking for ways to raise domestic output.

The Indian Navy is escorting Indian crude oil carriers transiting through the Strait of Hormuz in the wake of the heightened threat perception following recent attacks. Naval teams have boarded Indian oil carriers and are escorting them out of the region. At least half a dozen tankers have been escorted out since June.

The navy has also deployed two warships Chennai and Sunayna in the Gulf of Oman and Persian Gulf to undertake maritime security operations. Naval aircraft have also been conducting surveillance in the area. Also, the navy's Information Fusion Centre-Indian Ocean Region which was launched in Gurgaon in December last year is also keeping a close watch on the movement of ships in the Gulf region.