Sushma Swaraj to the Rescue, Again! EAM Helps Indian Man Who Lost His Passport in US at the ‘Wrong Time’ 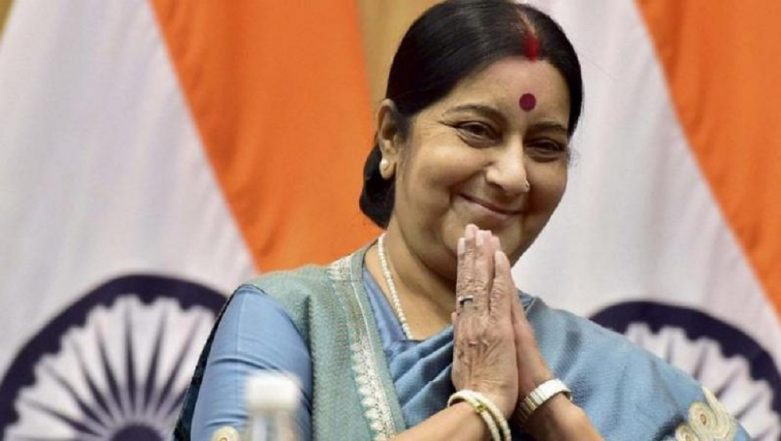 New Delhi, July 31: External Affairs Minister Sushma Swaraj has yet again come to the rescue of an Indian man who lost his passport in the United States, just days before his wedding in India. Devatha Ravi Teja tweeted to Sushma Swaraj seeking help with expediting his tatkal request for the lost passport as he needs to get to India before his wedding.

Teja tweeted that he was supposed to fly to India on August 10 for his own wedding functions between August 13 and 15. He said that he had lost his passport and needed help with getting it in time to fly for his wedding. (Also Read: Sushma Swaraj is taking on trolls like a boss)

Responding to his tweet, Swaraj quipped that while he has lost his passport at a "very wrong time", the ministry would help him on "humanitarian grounds".

Here is the Twitter exchange between Teja and Swaraj:

@SushmaSwaraj ji, I lost my passport in Washington DC USA. I have my wedding on August 13-15. Traveling on August 10. Please help me expedite my tatkal request and help me in attending my wedding in time. You are my only hope. Plz do the needful.

Devatha Ravi Teja - You have lost your Passport at a very wrong time. However, we will help you reach for your wedding in time.

Navtej - Let us help him on humanitarian grounds. @IndianEmbassyUS https://t.co/wxaydeqCOX

Swaraj immediately instructed the Indian Embassy in the US to help Teja get his passport. The embassy officials have begun the procedure to ensure Teja gets to travel in time for his wedding.