She is being bashed left, right and centre, trolled, abused and what not, but External Affairs Minister Sushma Swaraj is taking on all of it like a winner. 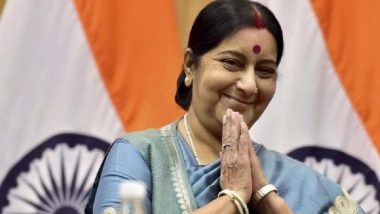 Mumbai, July 11: She is being bashed left, right and centre, trolled, abused and what not, but External Affairs Minister Sushma Swaraj is taking on all of it like a winner. Sushma Swaraj is giving it back to trolls on Twitter like a boss. She has had tweets thrown at her by users threatening her, criticising her, but the minister has been patient yet has dealt with each one of these with utmost grace.

On Tuesday night, when an Indian citizen holed up by authorities at Bali airport lost her cool, Sushma Swaraj calmed her down with a "Beta, I understand your anger" tweet. When a user tweeted why the woman was using harsh language against the EAM, Sushma Swaraj tweeted, "Don't feel bad. EAM is listening to only harsh language these days."

Beta - I understand your anger. We are making all out efforts. Our Consul General and Ambassador had taken up this matter. Now we have spoken to the Foreign Minister of Indonesia. Even now our Deputy Chief of Mission is in the Foreign Ministry to resolve this. https://t.co/6LXhJ3rqQT

This morning, when Sushma Swaraj wrote to a follower saying she doesn't lose her patience, another user tweeted saying that she was stubborn, high on power and, therefore, had anger issues. To this, Swaraj tweeted, "It's you who is getting angry. I'm doing my work in peace like always despite your anger."

Earlier this month, Swaraj had come under the attack by right-wing social media users after her Ministry took action against passport officer Vikas Mishra in Lucknow, who allegedly harassed an interfaith couple during the discharge of his duty.

After she returned, the minister, reacting to trolls and threats issued to her, tweeted, "I was out of India from 17th to 23rd June 2018. I do not know what happened in my absence. However, I am honoured with some tweets. I am sharing them with you. So I have liked them."

Swaraj has been ranked the most followed woman leader in the world and she occupies the seventh-spot in overall ranking, according to a study released by Twiplomacy. Swaraj has 11 million followers as per the list.

(The above story first appeared on LatestLY on Jul 11, 2018 11:01 AM IST. For more news and updates on politics, world, sports, entertainment and lifestyle, log on to our website latestly.com).